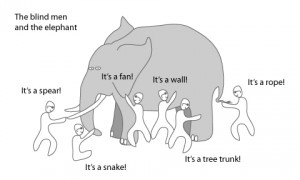 A paradigm is a theoretical formulation made up of a set of propositions – a model or template – that we use to explain our complex world.

In the study of international relations, for instance, the paradigm of “realism” sees all global politics boiling down to state actors pursuing power. “Marxist” and “critical” paradigms point to the primacy of economic and material concerns above all other things in world politics. There are scores of other paradigms that are used across many academic and intellectual disciplines. These are just a few classic examples.

A paradigm can be a very useful tool indeed. It is a lens, which can highlight or identify a recurring pattern or circumstance of human behaviour, where applicable.

But as with most tools, they come with limits.

One is that paradigms are static, whereas the world is nebulous, fluid, and constantly changing. Reality has numerous facets, which combine and overlap with one another. Exceptions to the rule abound. There can seldom be just one explanation to things. As a result our paradigms can be over-simplistic, incomplete or inaccurate – removing the complexity from the world which is actually one of its defining qualities.

The other issue is that humans are not particularly flexible when it comes to using their paradigms. Deep down we are creatures of habit and sometimes obsession. We cling to our powerful (and empowering) paradigms, adopting them as more or less permanent lenses on the world. We become emotionally, materially and politically vested in those lenses and so we refuse to take them off (also a form of laziness – who wants to expend all that extra energy judging the specifics of each circumstance to see if it really matches?). So like the ancient tale of the old woman who captures an eagle and changes its appearance to look like a pigeon (what a bird should look like to her) – we tend to reshape our perception of reality to fit our paradigms when they may not quite fit.

Contrary to the intention behind them, paradigms can be an obstacle to seeing things for what they really are.