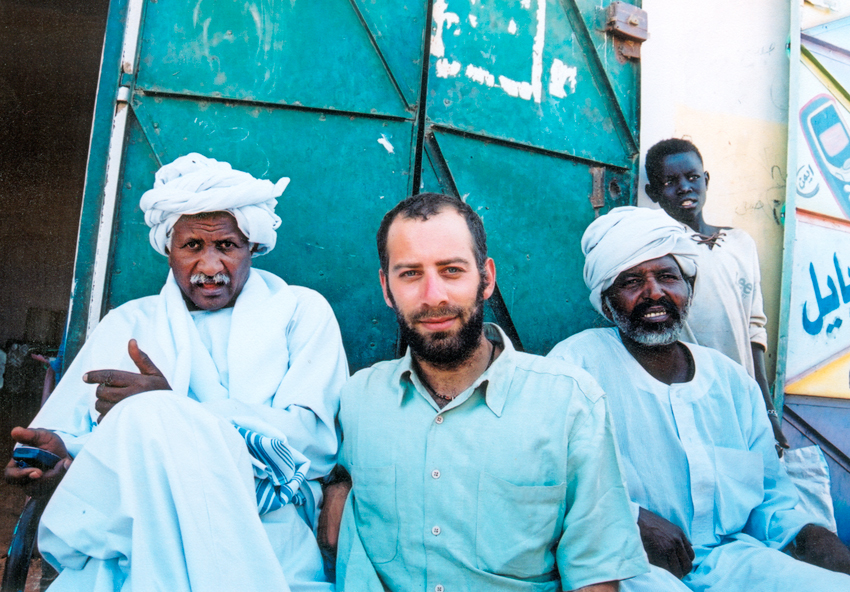 I like taking lots of photos when I travel. But, as ubiquitous as the selfie has become, I’ve resisted the habit of turning the camera on myself. As a result I have few mugshots of myself – and even fewer ones that I like.

But this photo, taken several years ago in Khartoum, by a young Sudanese boy, is probably my favourite. In part, because it captures one of those light, yet meaningful moments of personal connection that can happen in a faraway place. My fondness for the shot also stems from the story behind that scene.

The man on the left is Awad Abu Zeid, a Sudanese camel merchant. Abu Zeid made his living (and perhaps still does) by exporting live camels, hundreds of them at a time, to the camel markets of Egypt. The path along which the camels travel is known in Arabic as al-Darb al-Arbaeen: “The Forty Days Road.”

The Forty Days Road began as an ancient caravan route in the Sahara that linked Darfur with southern Egypt. It got its name from the average time it took to travel the route. When shipping and train transport became popular in the late 1800s, the “road” fell into disuse. 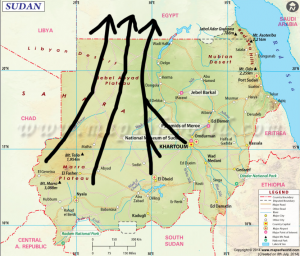 The most active routes nowadays are the eastern ones that follow close to the Nile River. There is also an occasionally used Red Sea route.

Today, the name “Forty Days Road” describes any number of rough tracks in the desert running between southern Egypt and Sudan. The only people using the path today are merchants who sell camels.

In his youth, Abu Zeid worked as a chief musher for such caravans. He made the trip, back-and-forth, countless times. He later rose in prominence to become a camel merchant himself, hiring the caravan teams to take his animals to Egypt.

I’d first heard of the Forty Days Road – and Abu Zeid – back in the late-1990s while living in Cairo. At the time, a couple of American women had hitched a ride with a camel caravan and published a coffee table book about it. Months later, a story about the semi-legendary route appeared in one of Egypt’s many fly-by-night English-language publications. Abu Zeid featured in that story and was portrayed as an immense character. I took an instant liking to him. I tore out the article and stuffed it in my notebook for safe keeping, sensing some future connection to this story.

Years later, while compiling documentary ideas as a TV producer, I came across the article in the notebook. After re-reading it, I made the instant decision to go on a research trip to Sudan to investigate the Forty Days Road. My plan was to travel overland from Cairo to Khartoum over a 5 week period. The mission: to learn as much about The Forty Days Road as possible – and find Awad Abu Zeid.

Those directives made for an incredible journey. I made my way south by micro-bus, felucca, ferry and lorry from one Nileside community to the next. Along the way, I visited some of the camel markets that were the destinations of those huge caravans. By the time I’d crossed into Sudanese Nubia, I’d already gathered loads of information about the Forty Days Road. But of Abu Zeid’s whereabouts, there was no hint. Not even the camel caravaneers I ran into knew the man. A typical query into Abu Zeid’s went something like this:

ME: I’m looking for Awad Abu Zeid. He buys camels and sends them along the Arbaeen. Do you know him?

CAMEL GUY: Are you sure?

CAMEL GUY: Yes. But his name is not Abu Zeid – it’s Abu Zee-yad. And he’s no camel merchant. He’s a saddle-maker living in Kordofan. Will that work for you? 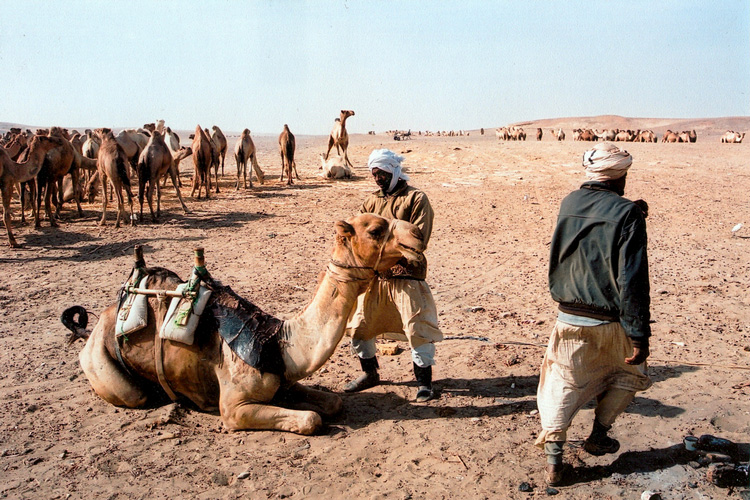 Things went on like that for a while. And then I got a break.

When I arrived at the village of Dongola, a camel veterinarian who I met under strange circumstances knew vaguely of him. From that man I worked my way along a trail of contacts – drinking much tea in the process – until I got close to Abu Zeid, who was reputedly in Khartoum.

The climax of this sleuthing unfolded late one night in the lobby of a cheap hotel in the Sudanese capital. My final source, who I’d met for my 5th or 6th tea of the day, dialled up a number on his Nokia flip-phone and handed it to me. On the line was none other than the jovial Awad Abu Zeid.

The photo at the top was taken with him, the day after I’d tracked him down.

Abu Zeid, a dignified gentleman, who spoke fairly good English and showed me much hospitality, was my guide in Khartoum that week. In addition to being an impeccably courteous host, he filled in the missing blanks in my research on the Forty Days Road.

The documentary, alas, never got made (another convoluted story). The reason I mention this episode is because, apart from being a great yarn, it is representative of the places, stories and characters I look for in my travels and work. It’s also an example of the kind of travel which I find most rewarding: journeys on the ground, across long distances, and with a specific goal in mind. Those sorts of trips require accepting a certain degree of uncertainty and trusting the local people, your own wits and the serendipity that’s generated in the process. It’s travel as hyper-education in living.

Some of the articles and photos on this website are the fruits those sorts of travels – some longer, others shorter – made since my quest to find the venerable Awad Abu Zeid.

Before turning my focus to photography and writing, I spent several years working as a documentary filmmaker. I produced and directed such projects as Up At Dawn: The Working Children of Egypt, and The Bitterest Exile. More recently, I worked as a producer on Canada’s Dark Secret, an Al Jazeera documentary about Canada’s residential school system.

My first non-fiction book was published in 2019 – about Bigfoot lore in Canada’s Great Bear Rainforest. In the Valleys of the Noble Beyond: In Search of the Sasquatch is published by Grove Atlantic in the U.S. and Greystone Books in Canada. The book is available for purchase on Amazon and other major online booksellers.

A subsequent work, Veils of Distortion: How the News Media Warps Our Minds, explores the manifold ways in which hard news can distort our perception of reality and our engagement with the world around us. You can order the book here.