Egypt’s Window on the World 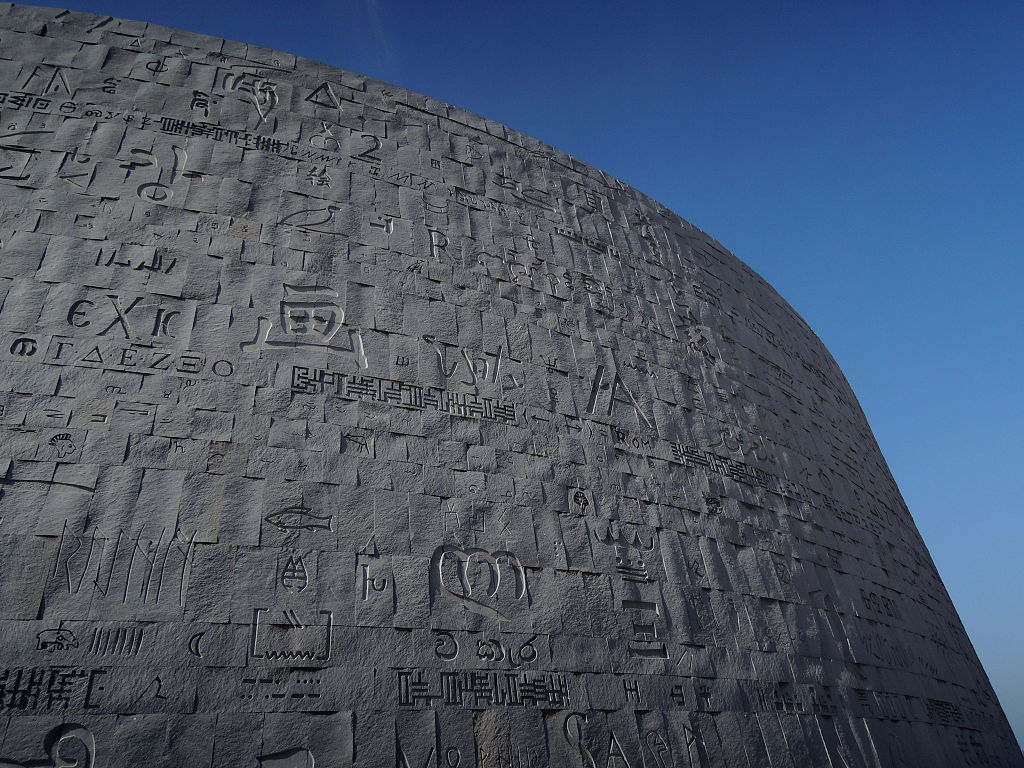 “My whole life was preparation for this job,” says Ismail Serageldin, as he flashes a wry smile and gazes out of his fifth-storey office window overlooking the Alexandria corniche. What might otherwise seem like an unusual comment coming from a man who gave up a sparkling career in international development to return to Egypt to take up a job as the head of a library, begins to make sense as the scale of the enterprise to which he heads comes into focus. Serageldin, a former vice president of the World Bank and longtime socio-developmental expert is today commandeering of one of Egypt’s most ambitious projects: he is the director of the Bibliotheca Alexandrina, a gargantuan library-cum-cultural centre inspired by Alexandria’s ancient library of antiquity.

The $220 million (Dh808 million) brainchild of the Alexandria historian, Mustafa al Abbadi, the Bibliotheca Alexandrina (meaning “Library of Alexandria” in Latin), is the modern incarnation of one of the most esteemed institutions of learning and knowledge in history. The Bibliotheca, whose ancient predecessor vanished under dubious circumstances in the late Roman period, took several years to build and first opened its doors to the public in October 2002. In addition to providing Alexandria University with a top-notch research facility, the library was undertaken as part of a larger effort to reinvigorate Egypt’s second city by capturing the same spirit of learning that once made Alexandria one of the epicentres of knowledge in the ancient world.

Today, several years after its inauguration, the library has taken a leading role in the small cultural renaissance that has transformed this otherwise sleepy maritime town. Billed as “Egypt’s window on the world, and the world’s window on Egypt,” the Bibliotheca has become one of the country’s most popular draws. Last year the library played host to almost one and a half million visitors, of which 450,000 are said to be local users of the facility.

This imposing structure, which stands out like a shimmering and otherworldly orb among the older, drab apartment complexes that dominate the city’s waterfront is reminiscent of the futuristic construction projects that have become de rigueur in the Gulf in recent years. Designed by the award-winning Norwegian architectural firm Snøhetta (the same company behind the King Abdulaziz Centre for Knowledge and Culture in Dhahran and the Gateway Project in Ras al Khaimah), the Bibliotheca was created to resemble a giant discus embedded at an angle in the ground symbolising a rising sun beside the Mediterranean. An outer wall constructed with 6,000 granite blocks and containing 4,200 symbols from 120 languages symbolises the long heritage of human knowledge that the library aims to embody. Inside, a vast aluminium and glass-roofed rotunda space was built to hold eight million volumes.

But as Serageldin points out, what the library has to offer and what it represents in terms of its ethos towards learning, are its real draw.

“We are different than any other library in the world,” says Serageldin. “The library of Alexandria is basically a learning centre with more components than the library itself. It’s one small piece of a very big thing.”

In addition to the library’s main holdings and lending facilities, the Bibliotheca contains six other specialised libraries including one for children’s books, for audiovisual materials, for the visually impaired and for rare books; three museums including an antiquities, science and ancient manuscripts; a planetarium, six art galleries for temporary exhibitions and seven research institutes. The library has its own chamber orchestra and houses an arts centre that puts on shows, performances and special exhibitions from around the world.

“We have an arts centre because we are also, in essence, a cultural organisation, ” says Sohail Wastawy, Bibliotheca Alexandrina’s chief librarian, who manages and oversees the library’s daily operations. “On any given week you might find musicians here from all over the world. One day you might see salsa dancers, on another day a performance by African musicians. We try and fulfil the cultural needs of the community here by exposing them to new things.”

Topping the long list of the Bibliotheca’s services and facilities is the much-touted Internet Archive – a digital repository containing snapshots of all web-pages on every website on the internet from 1996 until today. The American internet entrepreneur and digital librarian, Brewster Kahle, founded the Internet Archive in San Francisco in 1996. In 2002, Kahle and the Bibliotheca Alexandrina came to an agreement to work together to build a second Internet Archive site in Alexandria. Housed in a room full of supercomputers, the Internet Archive takes frequent snapshots of web-pages and websites over the course of their lives so as to preserve for coming generations the content that would otherwise be changed or deleted on the Web.

“The Archive aims at making knowledge accessible universally,” says professor Magdy Nagy, who oversees the IT department at the library. “We make this large collection, which measures over a petabyte [one million gigabytes] in size, available to anyone with internet access through a search engine known as the ‘Wayback Machine’. Simply put, this allows you to surf the Web on a time axis.”

According to the library’s director, the sum of the Bibliotheca’s parts amount to something above and beyond just a facility where people can come to borrow books or trawl for information.

“It’s far more than a library,” says Serageldin. “The original library, too, was much more than a library. It started as a temple to the muses and a think-tank that brought together some of the greatest minds of the ancient world. We’re trying to do something similar here.”

Despite all the references and connections to the Bibliotheca’s classical namesake, nothing of the original Library of Alexandria survived to the modern day. And what little we do know of this ancient institution is both obscure and patchy. The ancient library was built around 288BC by Ptolemy I under the guidance of Demetrius of Phaleron – a student of Aristotle – as a combined academy, research centre and library. It eventually grew to become the greatest institution of higher learning during both the Hellenistic and Roman periods, housing somewhere in the range of 500,000 to one million texts. According to a popular legend, every vessel entering the city’s port had to hand over any texts carried on board for copying and inclusion in the library.

Based in what was then the most multicultural and cosmopolitan city of its time, the library attracted talented minds, in all fields, from all over the Near and Middle East, to Alexandria to conduct research and exchange ideas. An immense intellectual ferment and cross-fertilisation took place, which resulted in some key discoveries in the sciences that set the world on new trajectories of knowledge. Among the intellectual superstars who had spent time at the library were Euclid who wrote his elements of geography, Eratosthenes who proved that the earth was spherical and calculated its circumference with incredible accuracy, and Herophylus who identified that the brain was the controlling organ of the body – an insight that launched a new era of medicine.

Accounts of the library’s demise are somewhat confused and contradictory. However, it is now believed that rather than having succumbed to a single tragic event, the library slowly vanished over time – a victim of the decline of empire and the successive upheavals that marked that decline. A fire during the Alexandrian War in 48 B.C., a revolt against Emperor Aurelian in 272 A.D., and a riot by a militant Christian mob in 391 A.D. are all cited as having damaged or destroyed important parts of the library. By sometime in the fifth century A.D. what remained of the library and its holdings had largely scattered to the wind. No physical trace of the actual buildings remains today.

So how does the modern library stand up to its ancient progenitor? The answer will depend on whom you ask.

It’s all about perspective say the Bibliotheca’s staff, all of whom dismiss the detractors as being too narrow in their approach.

“What we are doing is very new, and is maybe frowned upon by people who are very reserved, or very conservative,” says Wastawy, addressing the charge that the library’s holdings remain insufficient. “We have over 600,000 volumes, but we are only six years old. Not a million volumes yet, but an excellent number for a library which is just a baby library. Libraries are measured by hundreds of years.”

Even if the Bibliotheca has not yet reached the lofty heights of its ancient predecessor, one can’t help but get the impression that the library is setting new precedents for the culture around it. Serageldin, an erudite and no-nonsense innovator, and called by some “a renaissance man” because of his multidisciplinary experience and forward thinking (honed over the course of 28 years at the World Bank), runs a tight ship.

The most interesting thing about Serageldin’s approach, say the library’s workers, is that he has made the Bibliotheca an inclusive meeting place for the people of Alexandria to share ideas and discuss problems. Most of the hundreds of conferences and lectures that take place at the library every year are geared to the general public, who are invited to attend free of charge and to participate in the dialogues.

“We are a democratic platform where people can come and say anything that they want,” says Wastawy. “Part of this you see at conferences where people are totally free to speak in relation to any kind of topic. If the health system is bad, we’ll have a conference on that and people will come and ask questions or lodge complaints to the speakers. People hold us to a standard of wanting us to help fix everything – from potholes in the street to the education system.”

Serageldin, too, does not shy away from showing his pride when it comes to what he sees as the library’s unquestionable impact on the revival of Egypt’s second city and maritime capital.

“If you hold 600 events a year and that includes concerts, exhibitions, lectures, conferences and debates, you are certainly impacting on the intellectual and cultural life of the city. It has helped the economic base in terms of tourism but more importantly it has helped to redefine the image of Alexandria from being just a place where people come to look at the sea, or at the beaches, to the city of culture and history that it really is.”

This story appeared in The National newspaper of Abu Dhabi on June 14, 2009.