Several months ago, I picked up Daniel J. Boorstin’s The Image: A Guide to Pseudo-events in America. A 1960s classic of American cultural criticism, the book is a scathing indictment of what the author saw as the emerging tendency in the United States at the time to manufacture and worship virtual experiences over the real.

Boorstin exposed these changes (fuelled by rampant capitalism), in several different areas and professional fields: from the news media to the burgeoning global tourism industry, to advertising, the entertainment business, and the propagation of the “American Dream.” 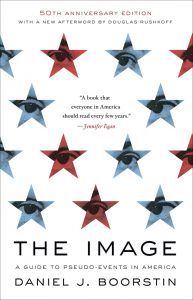 In each field, the projection of an ideal image or product—what Boorstin famously coined a “pseudo-event”—had come to replace some real-life version preceding it.

He tells us, for instance, that whereas fame had in the past become attached to individuals who had in some way earned their notoriety through great acts of will or genius, modern “celebrities” by contrast had merely become “famous for being famous.”

For Boorstin, this marked the beginning of America’s decline: a descent into fantasy, illusion and lies whose trajectory would reach no good end. The mind-altering and culture-warping impacts of digital and screen-based technologies that came to us decades later, make The Image a kind of prophetic work.

As a writer and journalist, the one thing that stood out for me in Boorstin’s tome is his depiction of the news media’s behaviour. One instance he illustrates is particularly poignant.

Early in the book, the author writes about the relationship between political demagogue Senator Joe McCarthy and the American press corps, whom, Boorstin argues, empowered the rogue politician through the coverage they gave him in the 1950s. What amazed me is that Boorstin could have been writing about the relationship between today’s news media and former U.S. President Donald Trump.

He had a diabolical fascination and an almost hypnotic power over news-hungry reporters. They were somehow reluctantly grateful to him for turning out their product. They stood astonished that he could make so much news from such meager raw material. Many hated him, all helped him. They were victims of what one of them called their “indiscriminate objectivity.” In other words, McCarthy and the newsmen both thrived on the same synthetic commodity.

He goes on to say:

Senator McCarthy’s political fortunes were promoted almost as much by newsmen who considered themselves his enemies as by those few who were his friends. Without the active help of all of them he would never have created the pseudo-events which brought him notoriety and power. Newspaper editors, who self-righteously attacked the Senator’s “collaborators,” themselves proved worse than powerless to cut him down to size. Even while they attacked him on the editorial page inside, they were building him up in front-page headlines. Newspapermen were his most potent allies, for they were his co-manufacturers of pseudo-events. They were caught in their own web. Honest newsmen and the unscrupulous Senator McCarthy were in separate branches of the same business.