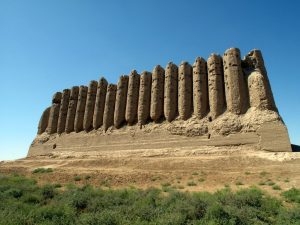 One of the largest, most advanced, and today least known cities in antiquity was the oasis centre of Merv, located in Central Asia, on the Silk Road, near today’s Mary in Turkmenistan. According to some estimates, Merv was the largest urban area in the world in 1200 A.D., with a population of more than half a million people.

Merv’s magnificence, unfortunately, must be left to the imagination as it was pulverized by the armies of Genghis Khan; its entire population put to the sword. Only a few dusty, sun-baked remains still stand.

Of its many reported qualities – including its colossal wealth and architecture – it is the city’s hydraulic system and waterworks that perhaps give the best indication of its astounding degree of advancement.

Because Merv was located on a desert plain, water was extraordinarily scarce. The inhabitants managed to divert and channel any and all water sources, near and far, into the city and surrounding countryside via a series of dams, catch-basins, canals, pipes and underground tunnels with access shafts – all built with complex changes of gradients. Even the morning dew was collected and used.

The entire system was an engineering marvel. Not just in terms of its construction, but also its maintenance.

To appreciate how complex and expansive the operation was, consider that Merv’s waterworks staff numbered 12,000 to maintain and repair the hydraulic system. Among them were 300 divers!

It may very well be that the need to cooperate on water issues helped to unite and gel Central Asian society, creating a kind of harmony of purpose that allowed them to succeed at so many other endeavours.

Like its neighbouring cities of Balkh, Bokhara and Samarkand, Merv was a node of high learning whose residents included savants and geniuses. It was also part of the wider Islamic renaissance that reached from China to Spain, and whose contributions, we now know, made possible much of the knowledge and advancements we enjoy in the West today.