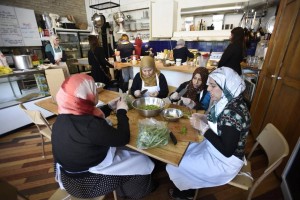 The influx of Syrian refugees coming into Canada has spawned a growing vogue of Syrian home-cooking events put on by eateries across the country.

One popular project called “Newcomer Kitchen,” hosted by Toronto’s The Depanneur, invites newly-arrived Syrian refugee women to cook a weekly meal. The food is sold online for pickup or delivery, and the proceeds are shared among the cooks.

The idea is brilliant. But when I came across an article about the project, I found something equally compelling: an inevitable moment of cross-cultural dissonance between the Syrians and their Canadian partners.

Here’s a paragraph from the article that quotes Depanneur owner, Len Senater, about an aspect of the operation:

“Of course, the endeavor isn’t without its challenges, including getting home cooks – albeit incredibly capable ones – to adapt to restaurant needs. Senater says, ‘When we tell them we need to make bread for 20 people, they just pour a bunch of flour into a container and say that’s enough for 20 people. They don’t know how much is actually in there, they just know that that’s enough for 20 people. We have to go and scoop it back out to figure out how much is actually there.’ Senater adds that even though the cooks are always exactly right in their portioning, he has trouble managing their inventory and ingredient requirements.”

Though innocuous enough, this anecdote strikes me as profound. The episode distills the essences, the strengths and weaknesses, the virtues and follies, of Eastern and Western cultures: the West with its lopsided and heavy emphasis on left-brain logical, sequential and linear thinking, heavily influenced by science which seeks to quantify and subdivide all; and the East with its more care-free, emotional, intuitive right-brain-heavy approaches to living.

Both cultural modes on their own, or in excess, are ultimately problematic.

Obviously, a more holistic complimentary operation of the two modes of thinking, which neither of our cultures actively encourages, is what is needed.

The late Edward T. Hall wrote in Beyond Culture that we can’t really see, understand, or transcend aspects of our own culture unless we have meaningful exposure to the cultures of others – which can highlight our own. This, incidentally, is also one of the great virtues of travel.

The above encounter draws out the sort of deeper lessons that can be learned when one culture is placed side-by-side with another. It’s a process which the vociferous critics of immigration are wittingly, or unwittingly, trying to stop – to everyone’s detriment.