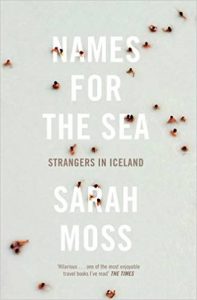 I’ve just finished reading Names for the Sea, a travelogue by writer Sarah Moss. The book chronicles her difficulties living and working as a teacher in Iceland, with her husband and kids in tow.

Although it’s less action-packed than I like my travel literature to be, the book contains more than a few brilliant gems of cross-cultural observation. Moss, who’s British, has a very hard time assimilating into Icelandic culture, which, as it turns out, is sometimes hugely at odds with her own – but in extraordinarily subtle ways.

I’ve written on this blog before that one of the boons of travel to places far removed from one’s own culture is that it can provide deep insight into other norms and ways of being, which, ultimately, comes full circle and provides insight into one’s own. Struggling to move through other cultures challenges our assumptions, which become mechanized and set according to our more predictable norms. Moss, explores this dynamic more than a few times in her book:

“Iceland has complexities so subtle that their existence is invisible to the inattentive foreigner. One of the Icelandic clichés about Icelanders is that, by foreign standards (as if ‘foreigners’ had one standard), they are rude. There is no word for ‘please’ in Icelandic. ‘Thank you’ and ‘sorry’ are used much less than in British and American English. Nevertheless, it has been clear to me from the beginning that Iceland is a place where the most intricate and important things are unarticulated, partly because intricacy doesn’t need to be spelt out in a place where everyone has always known how things are done, and partly because it is un-Icelandic to explain yourself. Self-explanation suggests some entitlement on the part of your audience to know your interior life. Icelandic drivers don’t indicate, Pétur once old me, because they don’t see why anyone else needs to know where they’re going.”

Sarah’s friend Pétur, who, decades earlier, moved to Iceland from the U.K., goes on to tell her about his experiences among Icelanders during his first few years there:

“There were manners of course, but the manners were sometimes not to say anything. So I’d say, ‘Excuse me, but please would you pass the potatoes.’ They’d pass them and I’d say, ‘Thank you.’ And they’d look at me, because you don’t say thank you when someone gives you a potato. That’s why you’re there, and why the potatoes are there, so you can eat them, and you know that and they know that you know that so why would you say thank you? There’s not very much of that kind of thing in Icelandic, it’s at a lower level in the same way that the flowers in the fields and the trees on the hills are at a lower level. They’re smaller and more subtle and they make more sense.”

Names for the Sea: Strangers in Iceland, by Sarah Moss, Counterpoint, 368 pages.