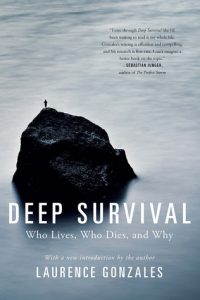 I’ve taken an interest in stories of survival in extreme, life-threatening, situations. I got hooked after reading the better known mountaineering classics like Jon Krakauer’s Into Thin Air and Joe Simpson’s Touching the Void – jolting, fast-paced reads about the unrelenting power of the natural world and our frailty when faced with it.

Since finishing those titles I’ve devoured virtually everything found on the topic from Nathaniel Philbrick’s In the Heart of the Sea, about the sinking of the American whaling ship Essex in 1820, to Erik Bjarnason’s Surviving Logan about an ill-fated climbing expedition on Canada’s highest mountain in 2005.

As a travel and adventure writer, I was bound to become entangled in this subject sooner or later. Not only have I met lots of people who’ve had close brushes with death, but as an avid hiker I’ve found myself increasingly cognizant of the dangers of travel in the backcountry. Those of us who are active outdoors are more acutely aware of stories about wilderness mishaps and people becoming lost, or simply vanishing without a trace. These incidents are far from rare. I’ve been disoriented in the mountains myself, and have had a few close calls with bears, so I know how quickly and unexpectedly one’s fortunes may turn for the worse.

I’ve just read a superb book that conveys the essence of why people tend to get into trouble in the outdoors – and how they either pull through, or succumb to, their difficulties. Laurence Gonzales’s Deep Survival: Who Lives, Who Dies and Why is a book about the psychology of survival. His work examines case studies of tragedy – and near tragedy – in the outdoors to explain how those situations came to pass. Gonzales weaves in cognitive psychology, philosophical perspectives on human behaviour and his own do’s and dont’s in dangerous scenarios to create a sort of tao of survival.  The book argues that our mental attitudes, habits, perceptions and the state of our awareness play a huge role in our ability to avoid, and survive, life-threatening situations.

For Gonzales, self-awareness is the fundamental ingredient. “To survive, you must find yourself,” he writes. “Then it won’t matter where you are.”

Deep Survival is not just applicable to extreme sports and the outdoors. It is a guide to surviving life. Below are just a few of the many ideas running through this rich and thought-provoking book.

1. The ability to manage high emotion arousal is an important survival skill.

The reason we are constantly adjured not to panic in an emergency is because we become mentally handicapped as result. We flee or freeze and become obtuse, unable to see and find potential solutions to our dilemma. High stress, excessive emotion, and panic narrows our perception. Gonzales writes, “Cortisol and other hormones released under stress interfere with the working of the prefrontal cortex. That is where perceptions are processed and decisions are made. You see less, hear less, miss more cues from the environment, and make mistakes. Under extreme stress, the visual field actually narrows.”

2. Mental flexibility increases our survivability by allowing us to adapt to changing circumstances.

Humans have a notoriously hard time changing their minds about something, even when faced with overwhelming evidence to the contrary. Too many people get into trouble in the outdoors because they are attached to their plans, even when the conditions or circumstances on which the successful execution of those plans are based, change.

“Survival is adaptation, and adaptation is change,” writes Gonzales, “but change is based on a true reading of the environment.”

3. Humility can save your life. Arrogance and boldness can forfeit it.

This is related to the point above. There is no dishonor in turning back or forfeiting an outing or expedition if the conditions or circumstances appear untenable beyond reason. Desire and ambition result in a rigid ego that drive blind, willful execution of goals. For that kind of mindset, nothing but the objective, matters. Sometimes not even survival. And that has often lead to tragedy.

4. The right information will increase your chances of survival.

This not only applies to knowing what to do in various emergency scenarios, but in how to avoid trouble in the first place. For instance, novice hikers tend to get into accidents because they don’t do sufficient research on their hike. Specifically they sometimes don’t ask themselves whether they are fit enough for the hike, or how long they require to complete it. The result can be injury and/or getting stranded on a mountain after dark.

5. Patience is often a pillar of survival.

We don’t realize that our goals always take longer to accomplish than we estimate and want. Because faster is considered better and more efficient in our “time is money” culture, we tend to push to do things quicker than we should. This heightens the risk of accidents.

6. When people become lost in the woods, or mountains, they often try to make their surroundings fit their mental map of it (a behaviour known as ‘bending the map’). They constantly seek out the landmarks they know, but instead tend to become more lost and expend precious time and energy in the process, increasing their chances of death.

People who are lost in the wilderness should aim to recreate their mental map to reflect the new surroundings, which makes you at home in a place, relaxes you somewhat, assists you in seeing and thinking better, and helps you survive long enough for someone to possibly come to your aid.

7. By helping others In a survival situation, we also help ourselves.

Helping another person survive – whether it means attending to an injured friend, or trying staying alive for the benefit of a loved one back home – offers an increased chance of living because it gives you the deeper purpose and drive that runs contrary to the mentality to simply give up. “When Antoine de Saint-Exupéry was lost in the Lybian Desert, it was the thought of his wife’s suffering that kept him going,” Gonzales writes.

Writing news, travel yarns, cross-cultural anecdotes and riffs on how we see the world.