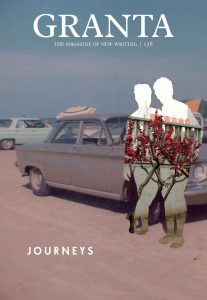 This is a question that’s bantered about a lot these days.

It’s not just political correctness, identity politics and the growing intolerance towards the legacy of colonialism that are causing some to charge – and others to fear – the relevance of non-fiction travel narratives. In this digital age everything seems to have been photographed, written about, or blogged to death. Humanity appears to have visited every conceivable niche. What could be left to describe? And how many of us truly, seriously, want to read another account of someone crossing the steppes of Central Asia on a segue as they search for the lost goat stew recipe of Genghis Khan?

The Winter 2017 issue of Granta, entitled “Journeys,” includes short essays by a dozen well-known writers that tackle the above question.

The consensus among them is that travel writing is not dead – and in a sense could never die as all our journeys through life are a form of travel, each unique, and each filtered through the writer’s individual personality and perspective. Most of them acknowledge that travel literature is changing, and should change, to encompass a wider variety of voices, perspectives and experiences to become more original and democratic – and no longer western-centric.

Below are a few quotes from the essays. If you’re interested, pick up the back-issue and read the complete essays which are seriously thought provoking.

“Travel writing isn’t dead; it can no more die than curiosity or humanity or the strangeness of the world can die. If anything, it’s broken out of its self-created shell, as more and more women give us half their world, and Paris is ever more crowded with visitors from Chengdu.”

“Some of the most important kinds of travel writing now are stories of flight, written by people who belong to the millions of asylum seekers in the world. These are the stories that are almost too hard to tell, but which, once read, will never be forgotten.”

“It could be enlightening, for example, to read modern accounts of travels in the Western world, by writers from the East; if nothing else, we might then know how it feels to be ironized, condescended to and found morally wanting. Several such books may be in the offing. Some of our own medicine is surely coming our way. Travel writing isn’t dead. It just isn’t what it was.”

“The literature of travel describes the world as it is – but only as it is in its instant, as it appears to the particular sensibility of the passing witness. For that is the other aspect of travel writing that has begun frequently to be overlooked – that it has much to do with the beholder as the beheld. The writer filters her surroundings through her temperament, distilling something richer and more meaningful in the process… As long as there are writers, and as long as they stir occasionally out of their houses, there will be travel writing worth reading.”

“There is a supposition, too, that travel writing is a postcolonial presumption: a notion that reduces all contact between ‘First World’ and ‘Third World’ cultures to a patronizing act of acquisition. No mention here of travel as an avenue of understanding, of self-education or of empathy. Any meeting between unequal worlds is seen in terms of dominance – a notion that threatens to turn all human contact into paranoia… Whatever the current state of travel writing (which reached its popular peak in the 1980s) its continuance over the centuries belies its death sentence.”

“Instead of finding a Western angle of experience in countries like Vietnam – motorbiking from Hanoi to Saigon, boating in the southern delta, snapping up fabric arts from the Hmong, eating their way down the Mekong, seeking redemption from war experiences or war protests, romanticizing French colonialism, or tracing the ghost of writer Marguerite Duras – maybe writers should stick closer to home. What would it look like to travel to a mall, a local wood, a suburban tract – to deeply study and visit one’s own locale?”

“Travel literature will always be with us. But the centre of experience also shifts in the world. Stupendous traditions end accordingly, and spring up again from new, improbably sources.”