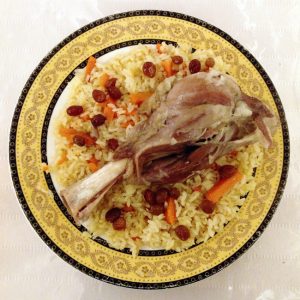 One doesn’t come across Uyghur food very often. As a culturally persecuted Muslim minority living in a far-flung and landlocked area of western China, their regional cuisine doesn’t get a whole lot of play either within, or outside, that country.

So when I discovered a Uyghur eatery while in Vancouver a few months back, I made a beeline to its door.

The place was called Efendi Uyghur Restaurant (“was” because, sadly, it has since closed down). Eating there was a revelation. Although the Uyghurs live in China their cuisine is not at all Chinese in the way we know Chinese food to be. It is more akin, in my opinion, to Afghan food featuring staples like grilled kebab, roast lamb and pilau rice. The Uyghurs, being a Turkic race with strong links to the Middle East and Central Asia (via Islam and the ancient Silk Road), also show traces of Arab, Persian and Turkish influences in their cooking. Cumin, parsley, and sumac were evident in some of the dishes we tried. The noodle and dumpling dishes, however, were more out of the Chinese playbook.

If you’ve visited even just a few countries along the old Silk Road route, then eating Uyghur cuisine can be a nostalgic journey through one’s past travels. All the different layers of subtle flavouring speak directly to other places. 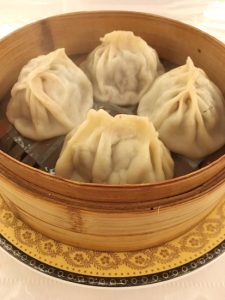 My dining partner and I asked for an order of steamed dumplings filled with spiced lamb. They looked very much like something you’d get at a Chinese dim-sum restaurant. Sampling them was one of the more fascinating culinary experiences of my life.

Quick back story: my dad’s family come from a Silk Road town in eastern Turkey near the Syrian border called Mardin. There is a local dish there among the Arabized Christians called kobeibat – a typical Middle Eastern kibbe ball, made of bulgar, that is steamed (not fried) and filled with spiced meat that’s heavily infused with onion and parsley.

The meat filling in the Uyghur dumpling tasted exactly like that of Mardin’s kobeibat, a culinary connection of several thousand kilometres. It was uncanny. In spite of the distance I intuitively knew that the recipes were linked, and that I had experienced cross-cultural mingling from the distant past tied directly to my own lineage.

Here’s a link to a Globe & Mail review by Alexandra Gill about the erstwhile Effendi Uyghur Restaurant. It serves as a good guide and starting point to exploring the Uyghur cuisine. The writing’s also great.