Canada’s old growth temperate rainforests on British Columbia’s Pacific coast contain some of the largest trees in the world – after California’s redwoods and sequoias. The oldest of those trees are located in the southwest of the province where high rainfall and mild winters allow relentless growth.

But more than a century of commercial logging has placed primeval old growth forests – and the delicate ecosystems that thrive within them – on the cusp of extinction. Only a handful of the largest trees remain on Vancouver Island and the Lower Mainland areas of British Columbia.

Government regulation of logging in B.C. has always been lax. So responsibility for protecting old growth forests from the most egregious deforestation practices has fallen to environmentalists, and at times, local indigenous communities. Protests and conservation campaigns, beginning in the 1980s, resulted in protection for a few areas. Clayoquot Sound on the west coast of Vancouver Island and the Great Bear Rainforest on the central and north coast, are a few of the better known examples.

But as the commercial logging industry pushes to find and cut down the last remaining tracts of old growth, concern for those forests is widening among regular citizens who see greater value and meaning in big trees than as just an industrial commodity. 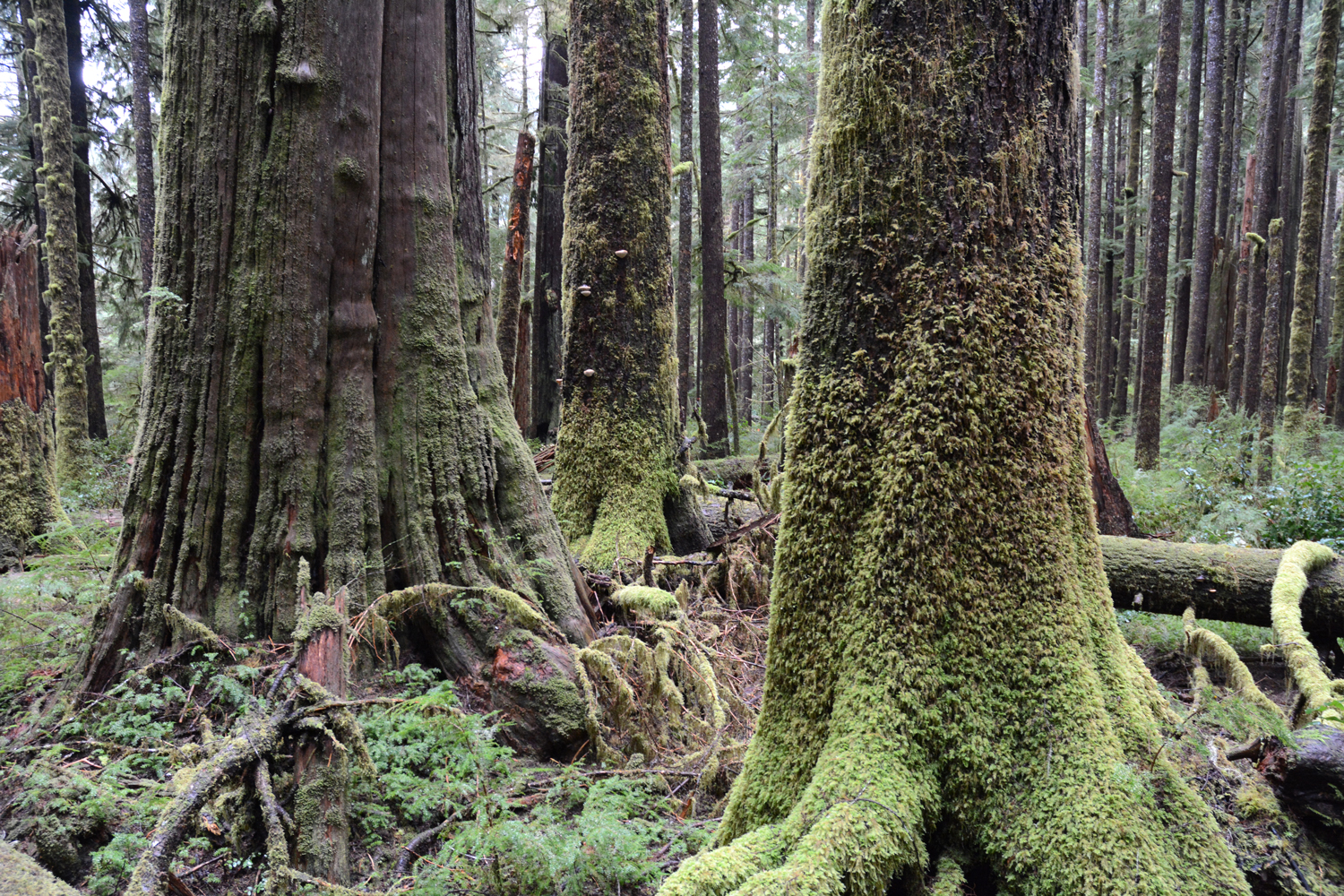 Old growth temperate rainforests once blanketed the entire Pacific Northwest coast. Some of the largest western red cedars, Sitka spruces and Douglas firs ever recorded have been found on valley bottoms and lower mountain slopes of southwestern B.C. – some over 1,000 years in age. Those ancient forests, like this one here on the west coast of Vancouver Island, are the apogee in a long evolutionary process. Old growth trees are important for healthy salmon runs, for providing animal habitat, and for regulating climate. © John Zada 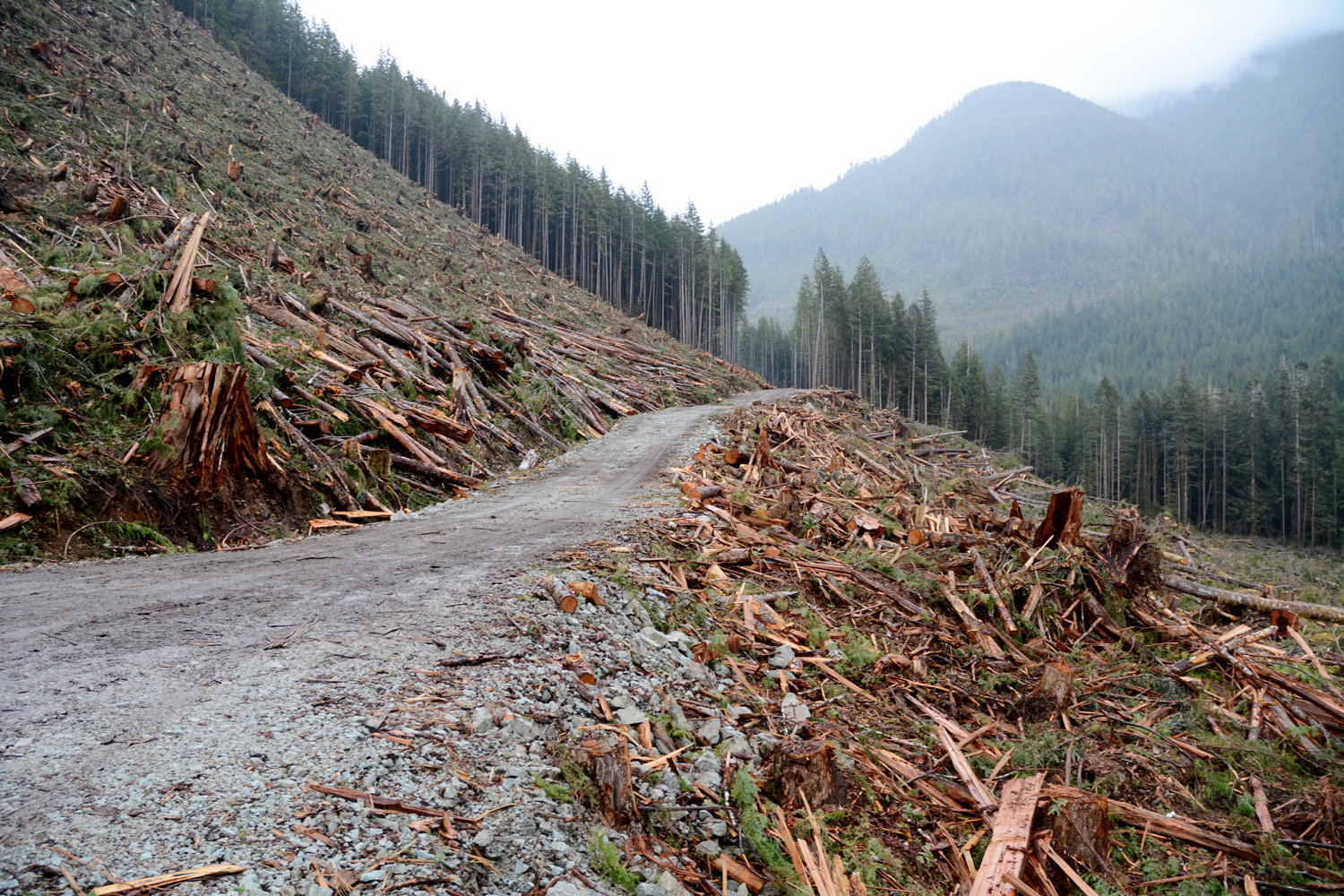 The commercial logging industry has been a mainstay of B.C. economy for over a century, employing thousands of people. But decades of job creation and profits have come at a heavy price. Over 90% of the lower elevation ancient forests have vanished from southwestern B.C. Most of Vancouver Island’s landscape is marred by clear-cuts. What little old growth remains is being aggressively cut down, along with smaller second growth trees whose raw logs are sent directly to China, Japan, Korea and USA. © John Zada 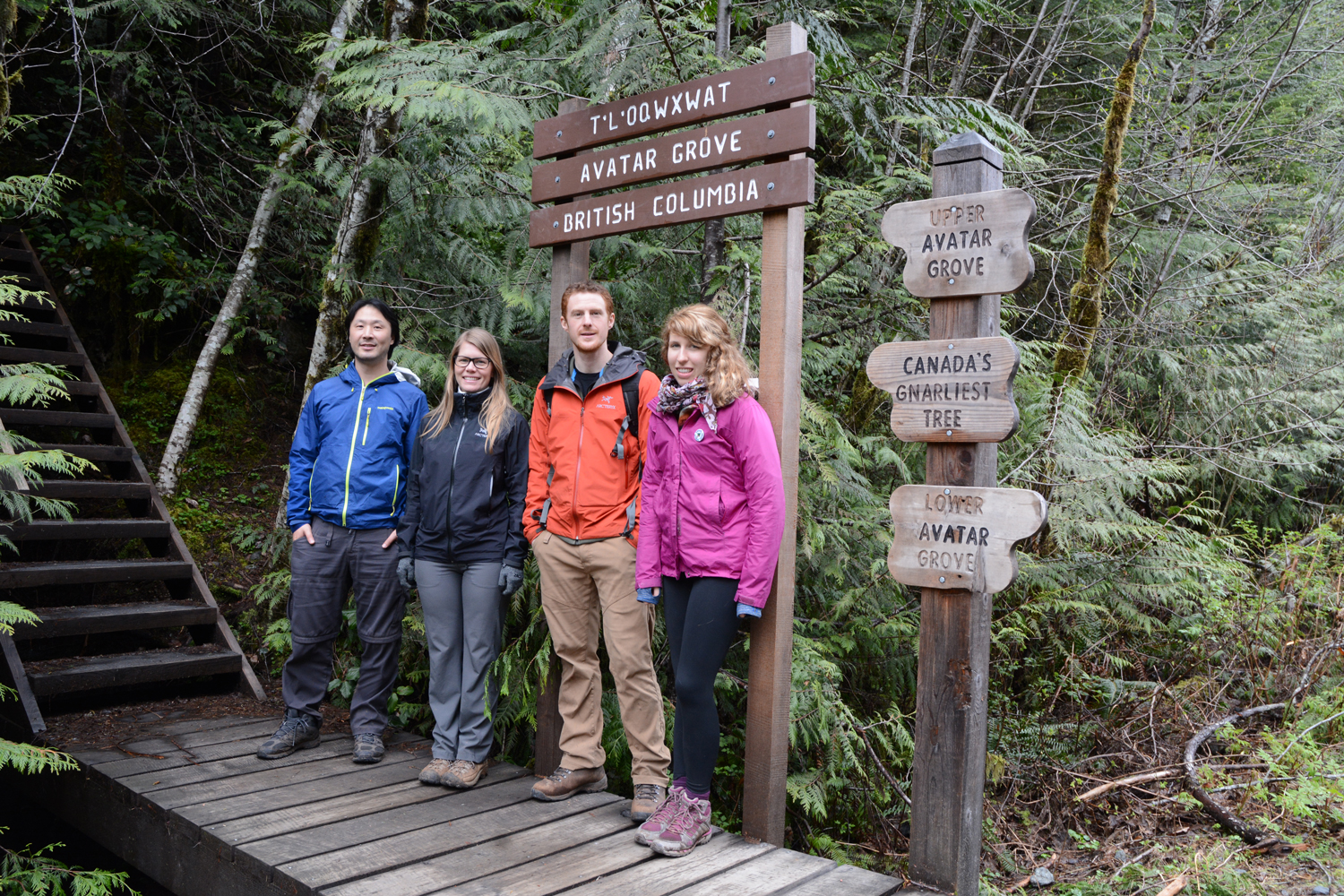 The Ancient Forest Alliance (AFA) is a conservation group advocating the end of old growth logging and a more sustainable second growth industry. They’re engaging a wider support base including businesses, municipal groups, forestry workers, unions, and ethnic and faith groups. “You have a long history in this province of environmental activists mobilizing other environmental activists,” says AFA co-founder and executive director Ken Wu (left). “There’s just not enough people in that community to make a big enough difference. © John Zada 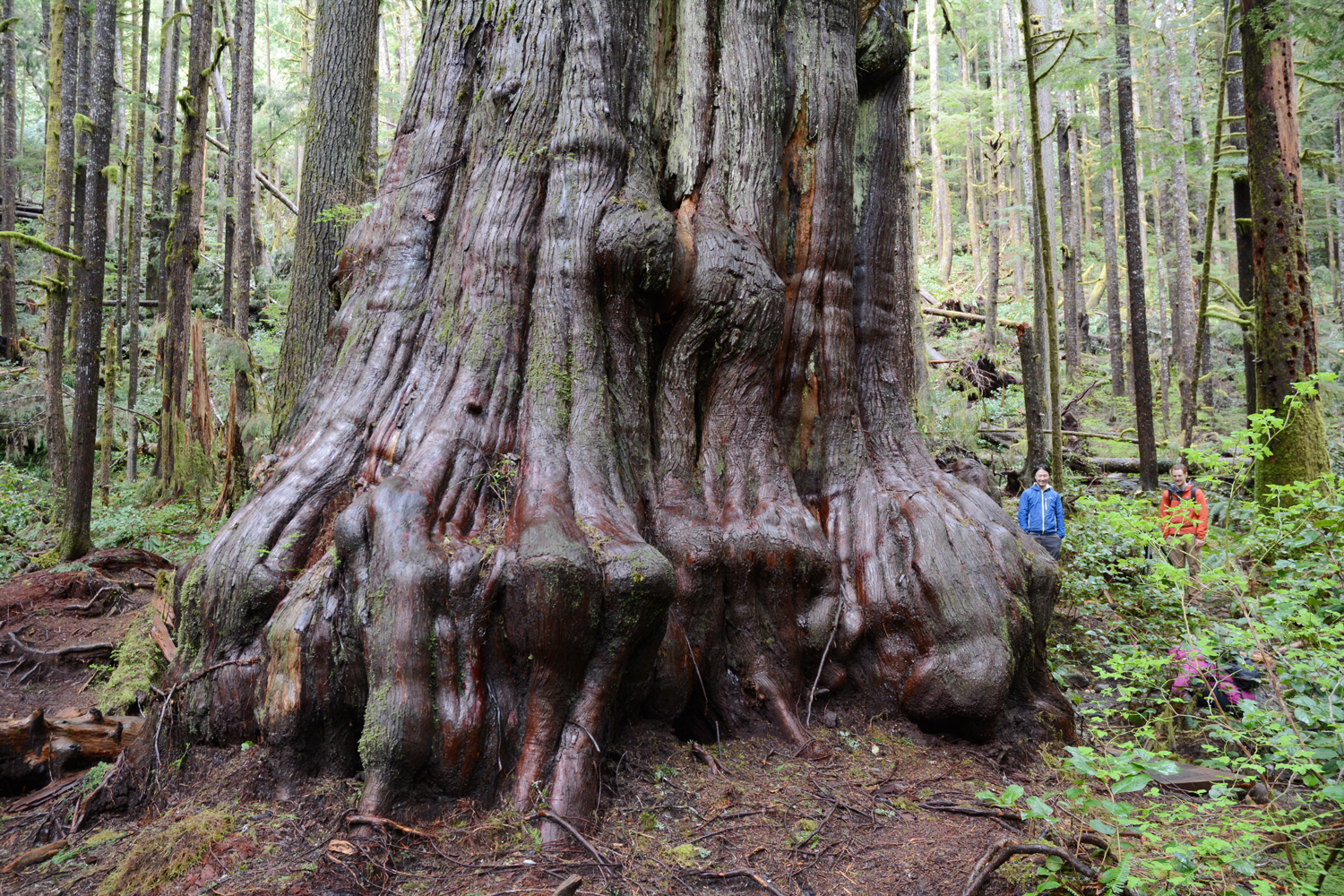 In 2012, after a two year campaign led by the AFA, Avatar Grove, in Pacheedaht First Nation Territory, near Port Renfrew on Vancouver Island, was protected. Thousands of citizens and businesses wrote letters and signed and circulated petitions. The AFA has since built a boardwalk with wood donated by the Pacheedaht Nation to enhance visitor access and promote local eco-tourism. © John Zada 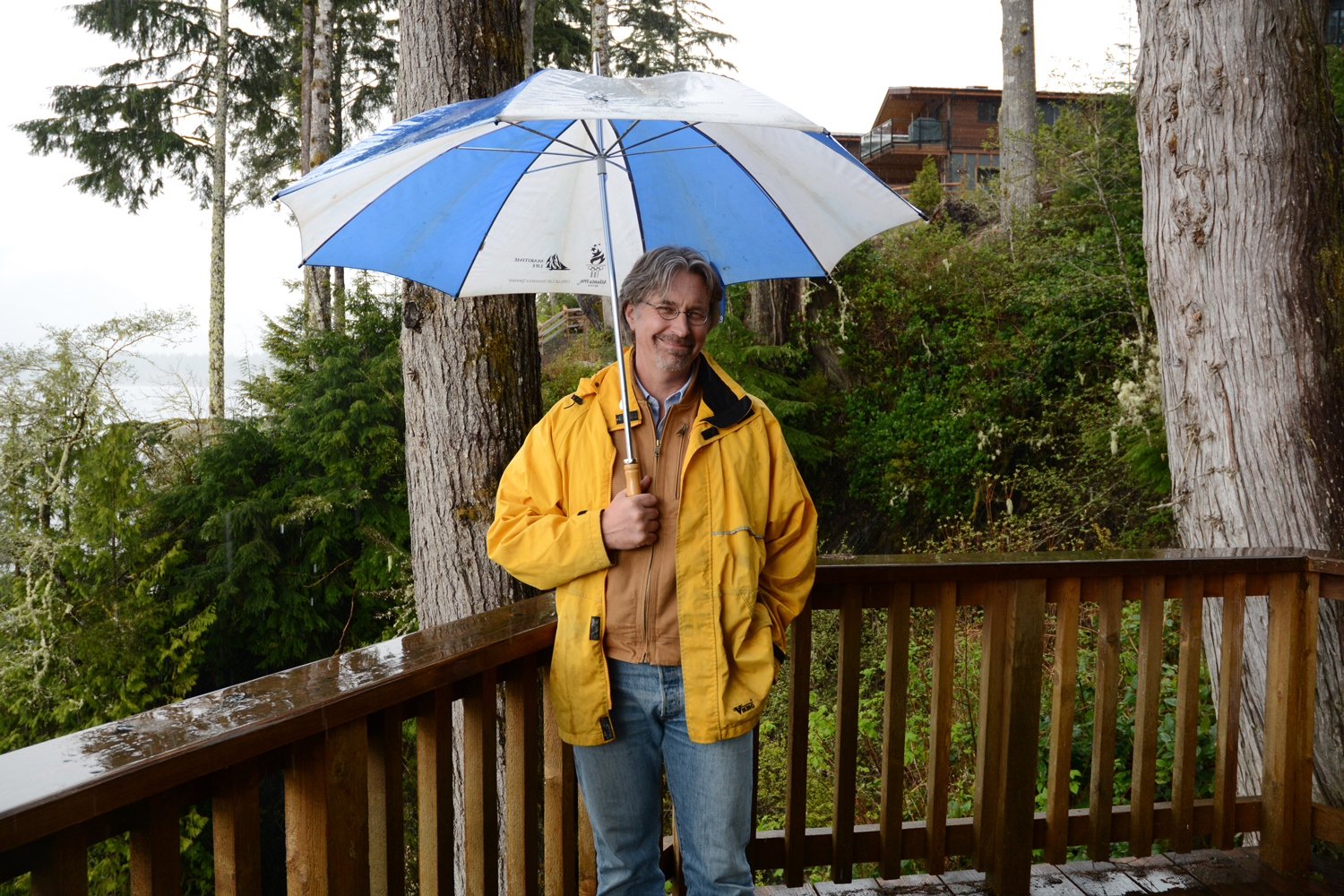 Key support to protect Avatar Grove came from the Port Renfrew Chamber of Commerce President, Dan Hagar. Also a local businessperson, Hagar went on to get a resolution passed at the B.C. Chamber of Commerce calling on the province to protect areas of old growth forest that have tourism value. “I grew up in the Prairies and you don’t see trees like this anywhere except in California and Oregon,” Hagar says. “It makes plain good business sense to leave those majestic trees standing because they have more economic value, over and over again, as a draw for tourists, than cutting them down and making stuff out of them.” © John Zada 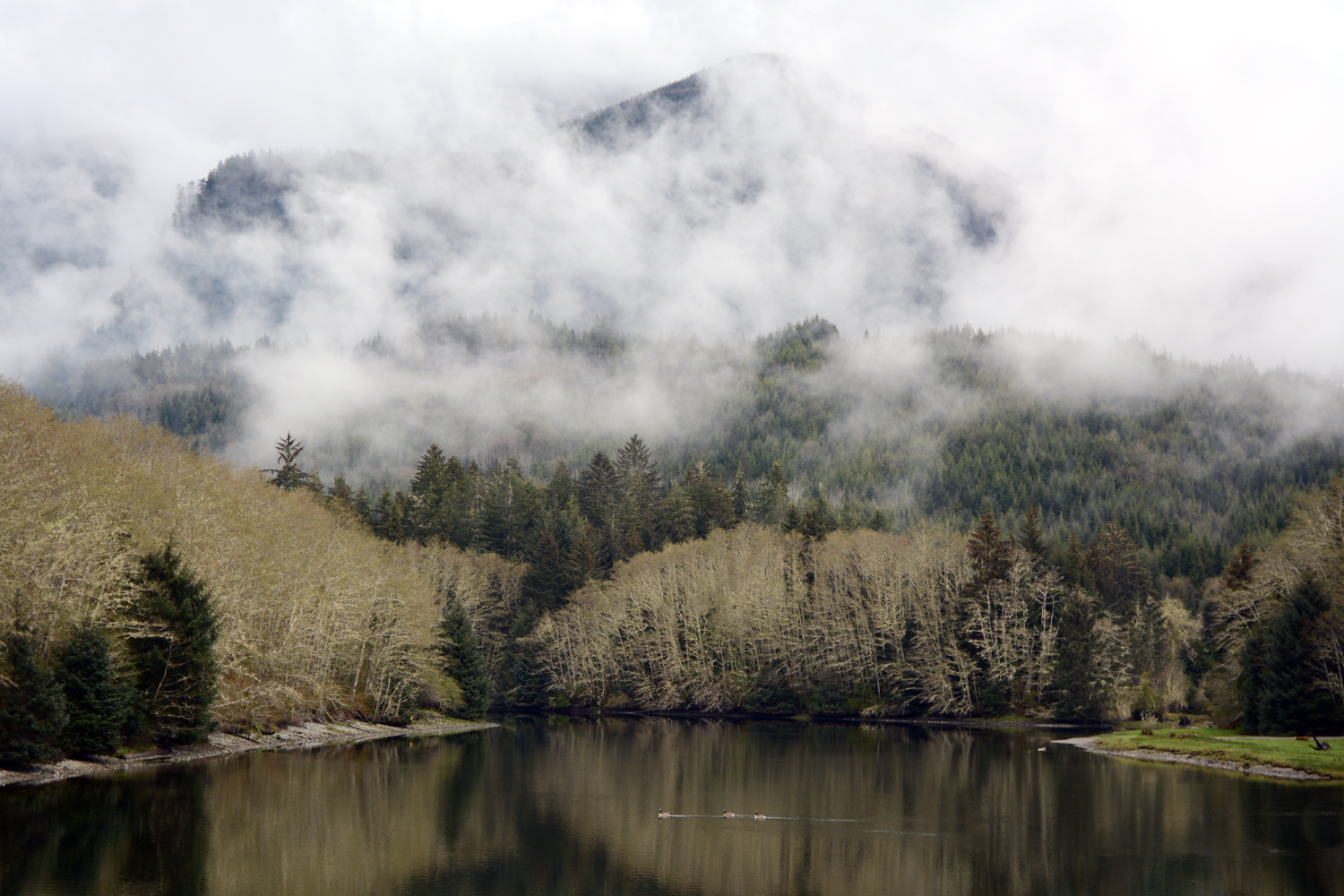 Like many indigenous communities in B.C., the Pacheedaht First Nation, whose territory is shown here, benefits from commercial logging – receiving revenues and provincial allowances to harvest trees. Because of such arrangements, some in B.C.’s diverse First Nations communities don’t support restrictions on their commercial logging rights. Others are in favour of conservation, particular if other sustainable economic opportunities are created. “There are very few places left where we can select suitable trees to build canoes,” says Gisele Martin, a Tlaoquiaht First Nation citizen, cultural educator and old growth advocate. “Building traditional canoes helps rekindle our culture through youth involvement in activities like tribal journeys, as well as songs and dances that recite ancient teachings on how to live.” © John Zada 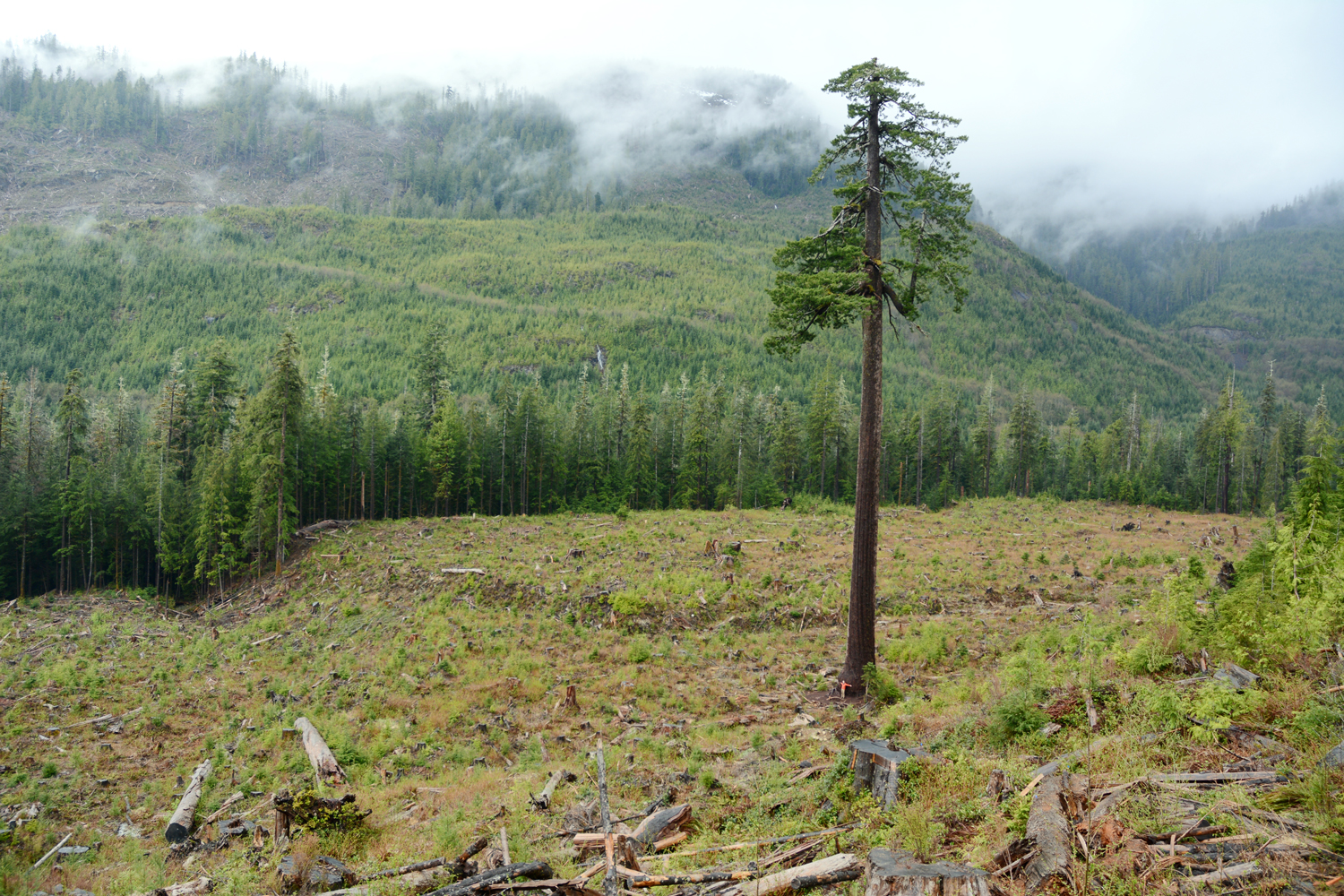 In 2012, a 69-metre tall Douglas fir, the second largest in Canada, was found by the AFA in an old growth clear-cut at the base of Edinburgh Mountain, also in Pacheedaht Territory. Dubbed ‘Big Lonely Doug,’ the tree has become an iconic symbol of the harrowing plight faced by the last of Canada’s giant trees. The tree was used as an attachment anchor for giant steel cables to transport the old-growth logs through the clear-cut to the road. A person, sprawled out at the tree’s base, can be seen here for scale. © John Zada 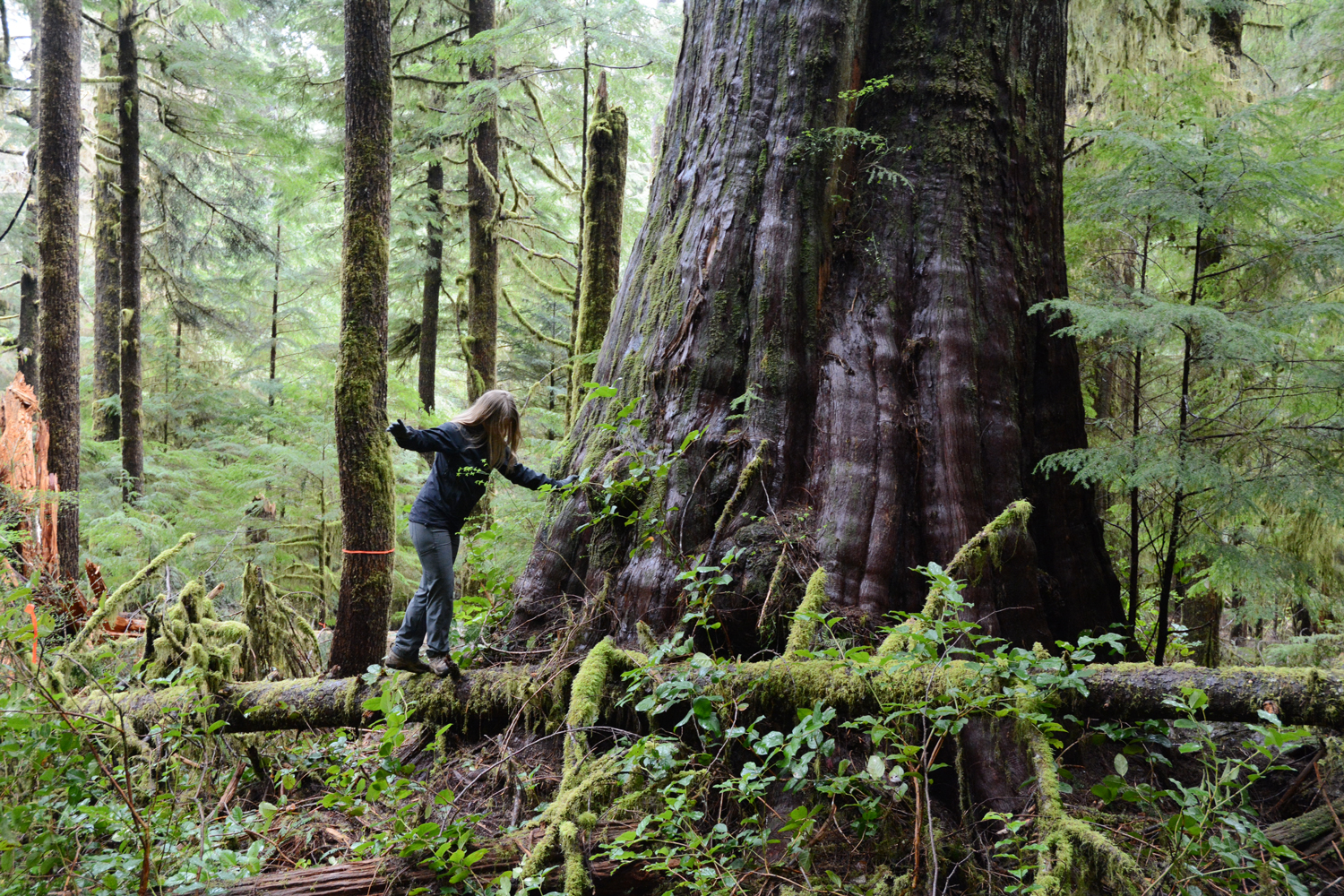 The old-growth clear-cut containing Big Lonely Doug was once part of the now remaining, but threatened, “Eden Grove.” This, one of the last lowland valley bottom primeval forests left on Vancouver Island is filled with ancient cedars and Douglas firs. It’s also home to bears, cougars, wolves, deer, elk, and bird species like the northern goshawk and marbled murrelet. © John Zada 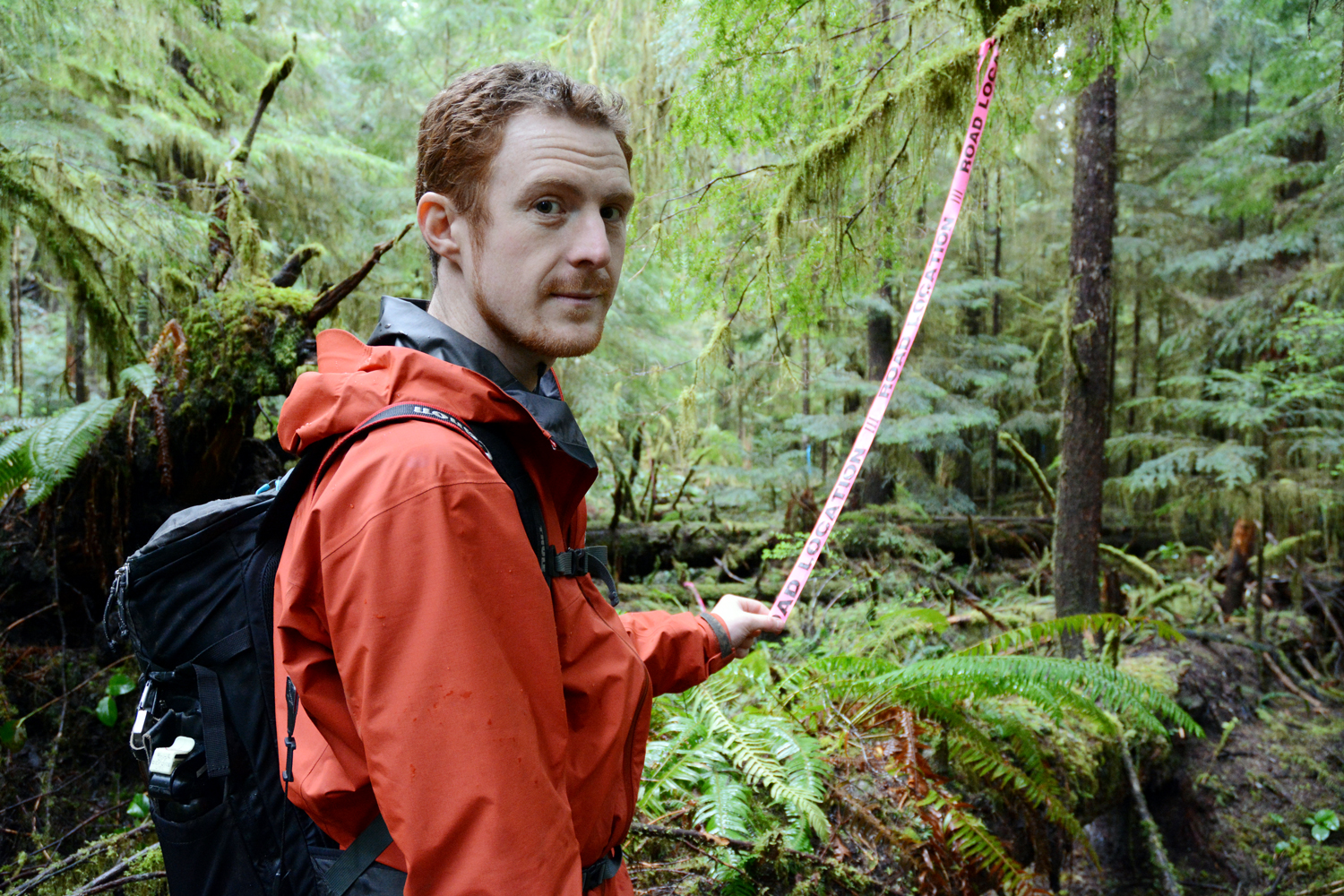 TJ Watt, AFA co-founder and photographer is seen here holding flagging tape marking the route of a logging road slated to pass through Eden Grove. Watt spends much of his time combing through satellite imagery looking for tracts of old growth – and then bushwhacking to inspect the sites. “It’s a bit of a race against the logging companies,” Watt says. “They’re hunting for trees too.” © John Zada 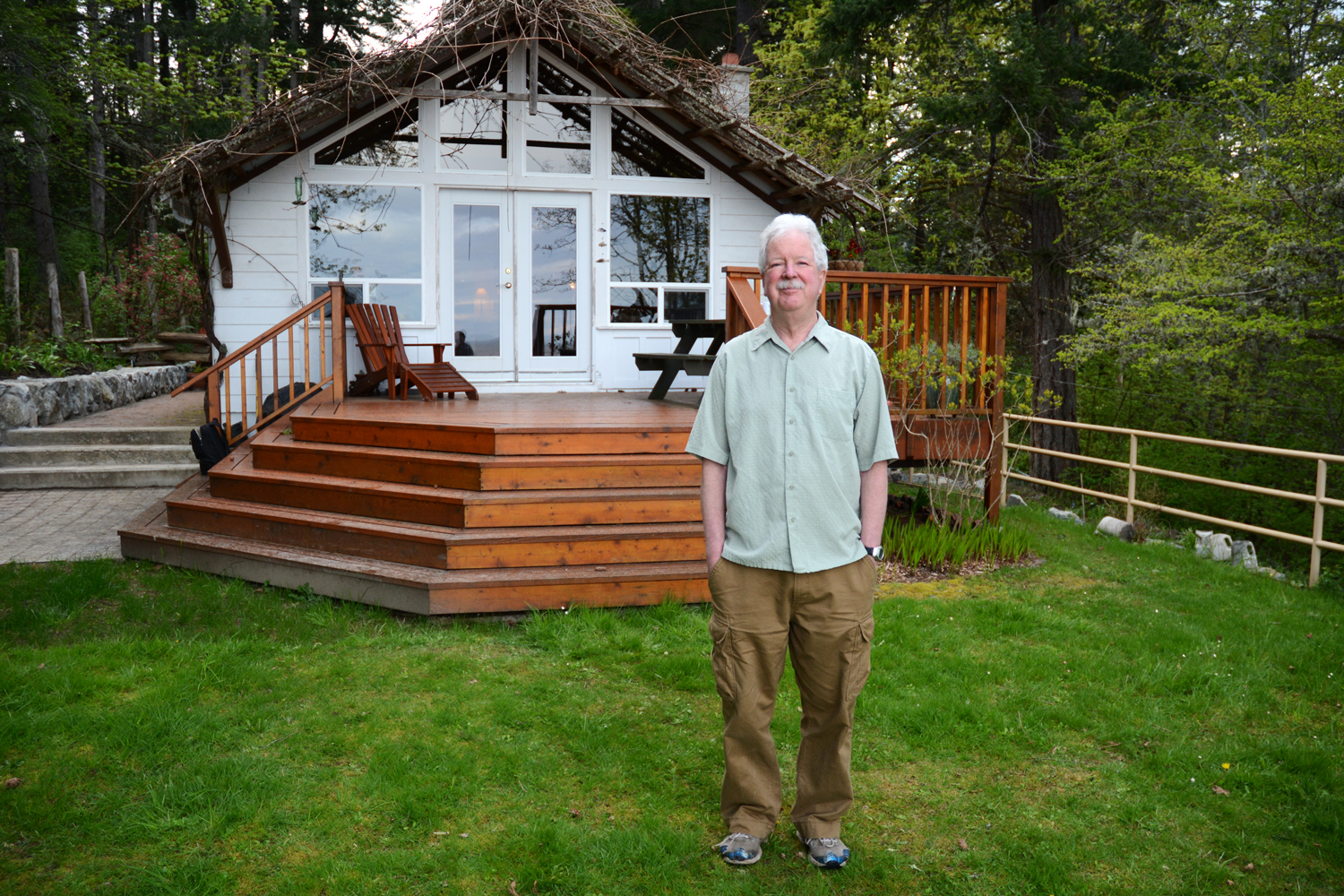 Dr. Andrew McKinnon, seen here at his Metchosin home on Vancouver Island, is a forest ecologist and local politician. He successfully championed a resolution at the annual meeting of the Union of BC Municipalities (representing the province’s mayors and city councilors) calling on the provincial government to save the remaining old-growth forests on Vancouver Island. “These are among the largest trees on earth and among the largest organisms that have ever lived on the planet,” McKinnon says. “By any measure, they’re globally outstanding ecosystems and we shouldn’t be converting them to second growth forests.” © John Zada 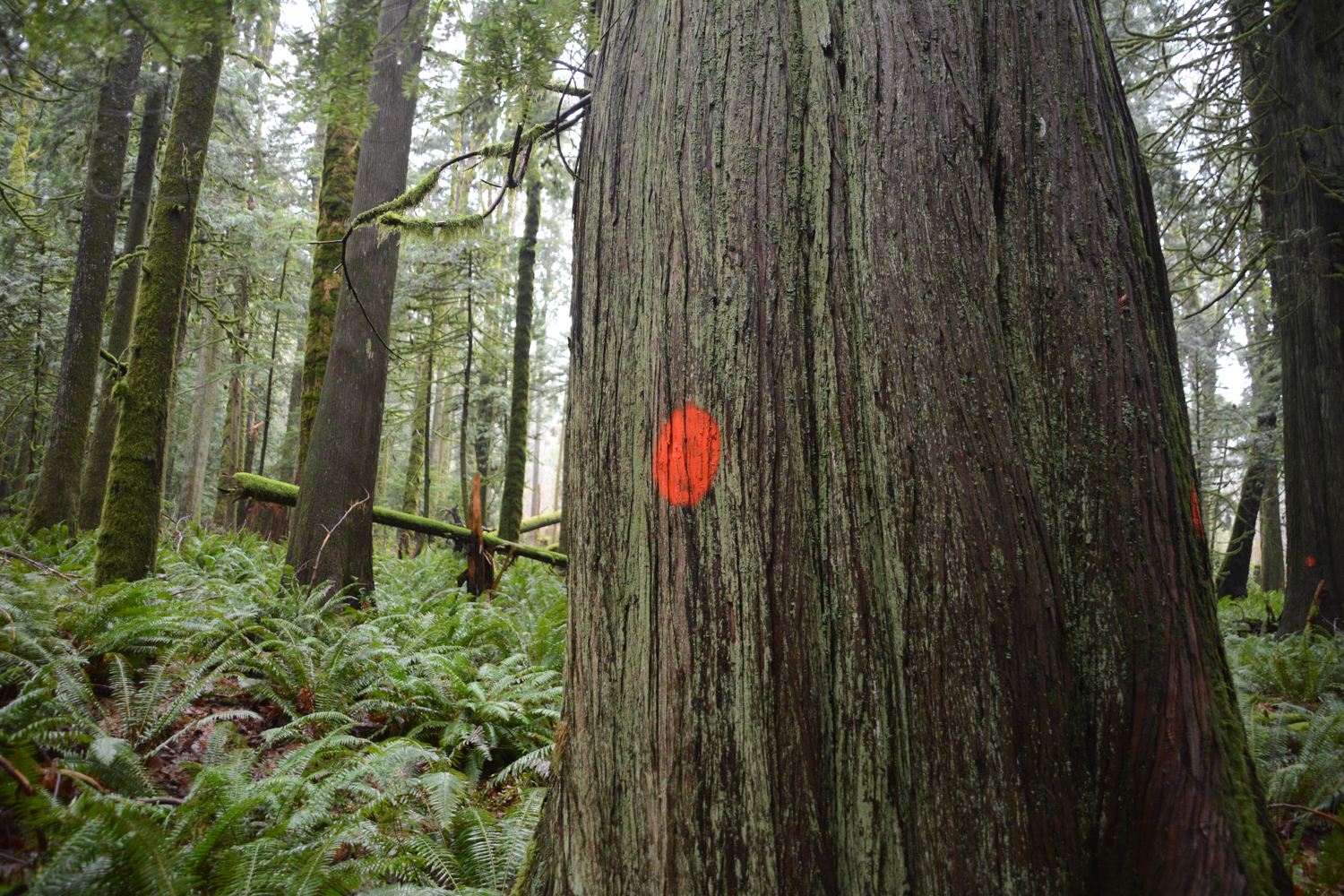 Another threatened forest is at Echo Lake, situated 90 minutes east of Vancouver near the town of Harrison Mills, in the territory of the Sts’ailes First Nation. For a few months in late fall, the area sees the largest gathering of bald eagles in the world – up to several thousand – which arrive for the fall salmon run at the confluence of the Harrison, Chehalis, and Fraser Rivers. Hundreds of those eagles roost in the old growth forest at Echo Lake at night. The south side of lake is protected from logging, but some of the largest cedars on the mainland, like this one, are still exposed on the north and west sides – and have been spray painted and surveyed for cut blocks. © John Zada 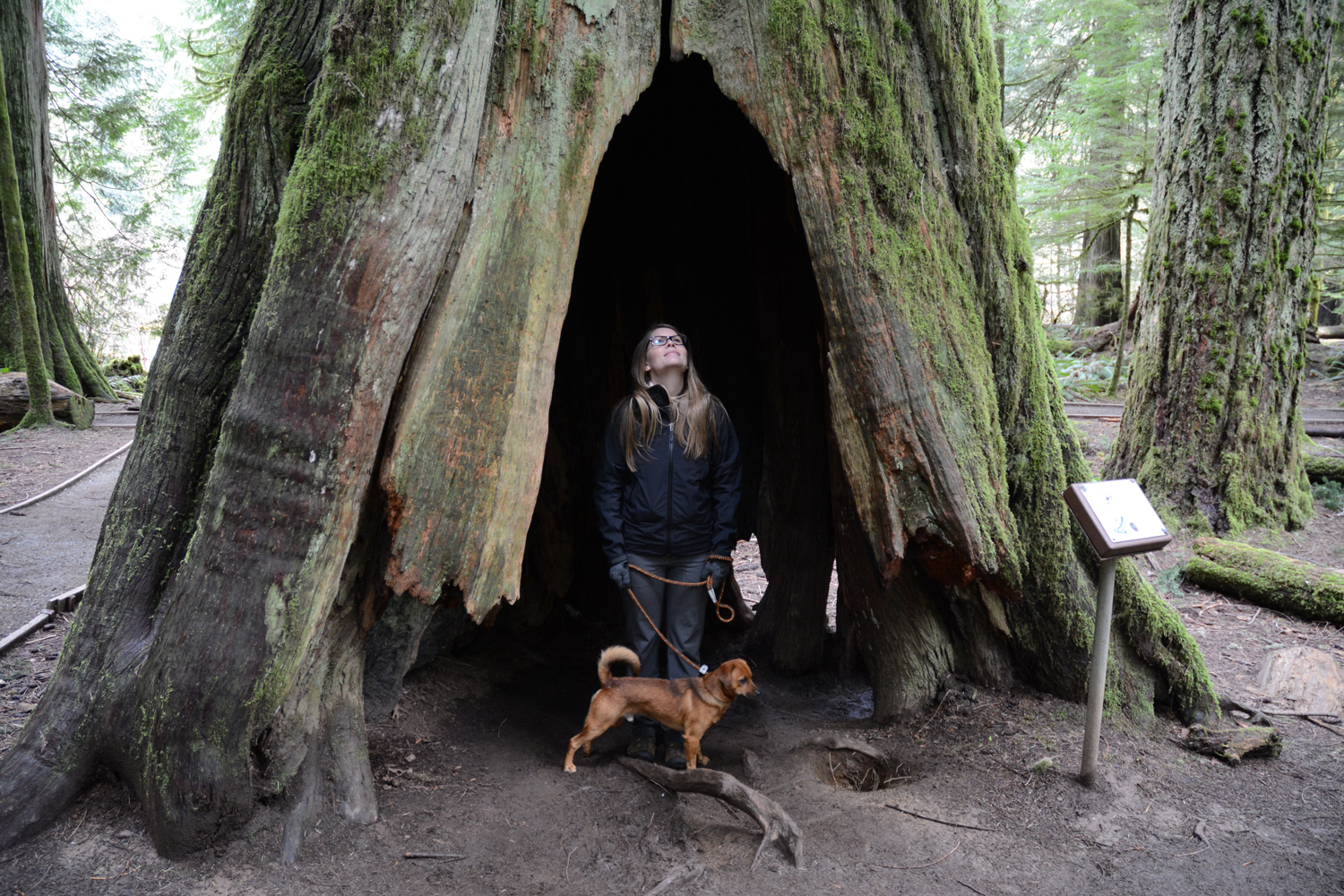 Cathedral Grove near Port Alberni is a national icon for big trees. Set aside in 1944 and part of MacMillan Provincial Park, the cluster of huge Western red cedars, bigleaf maples and Western hemlocks attract nearly a million tourists a year. Logging companies have nipped at the edges of the park for years. An adjacent old growth forest on Horn Mountain, above the park, is slated to be logged. © John Zada 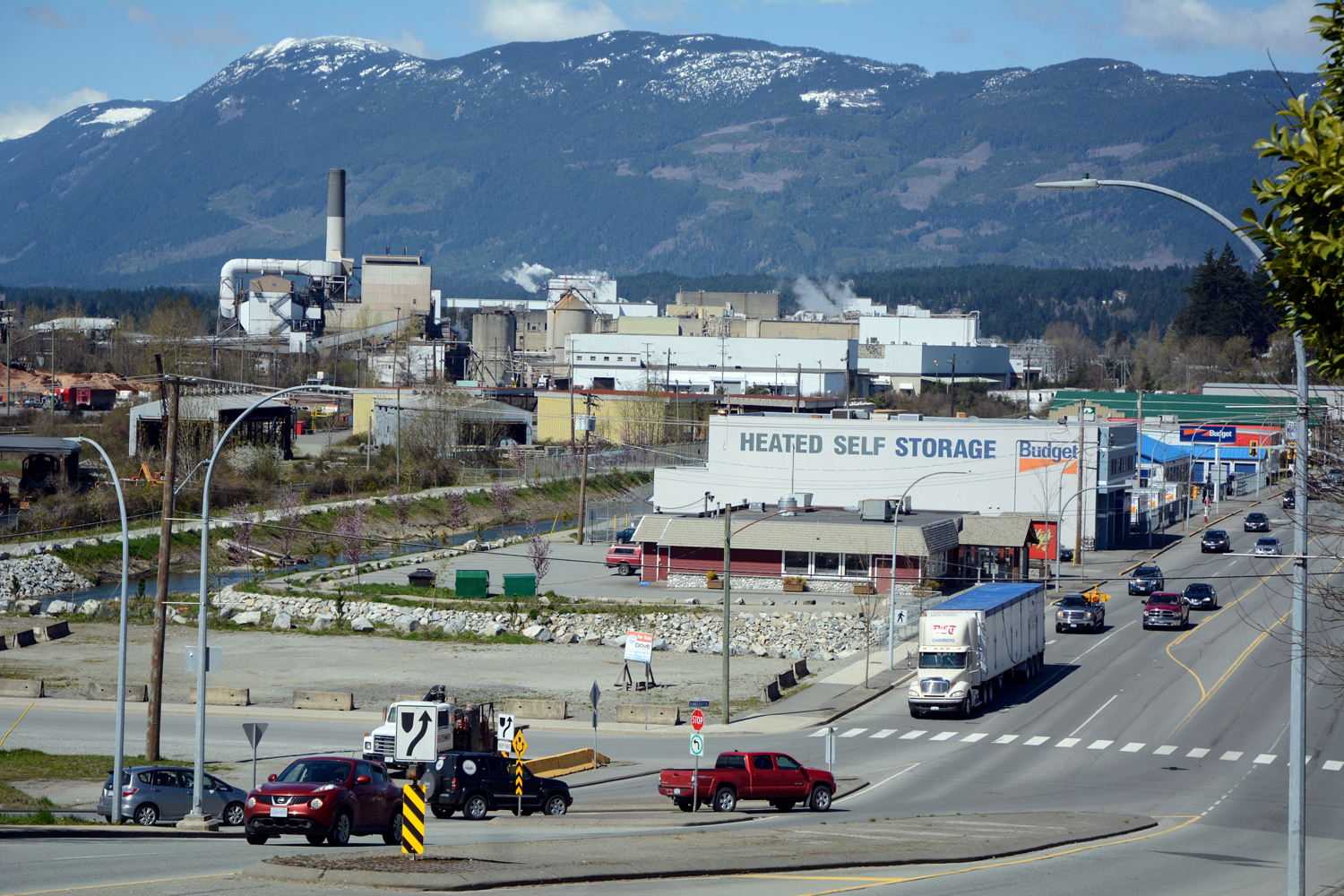 Workers at pulp and paper mills, like this one in Port Alberni, are also seeing the need for more sustainable practices. In the last four years, over 3 billion dollars worth of raw logs have been exported directly abroad, bypassing local mills and resulting in a loss of jobs. Built decades ago, sawmills are tooled for big old growth trees. There have been allegations that the government is deliberately awarding lucrative export permits to logging companies rather than helping mills recalibrate their equipment. Public and Private Workers of Canada, a pulp, paper and woodworkers union is supporting the end of old growth logging and a sustainable second growth industry. “We want to be on the right side of history,” says union president Arnie Bercov. “And on this particular issue I know that we are.” © John Zada

A version of this article ran on the website of Al Jazeera on 11 May 2017.