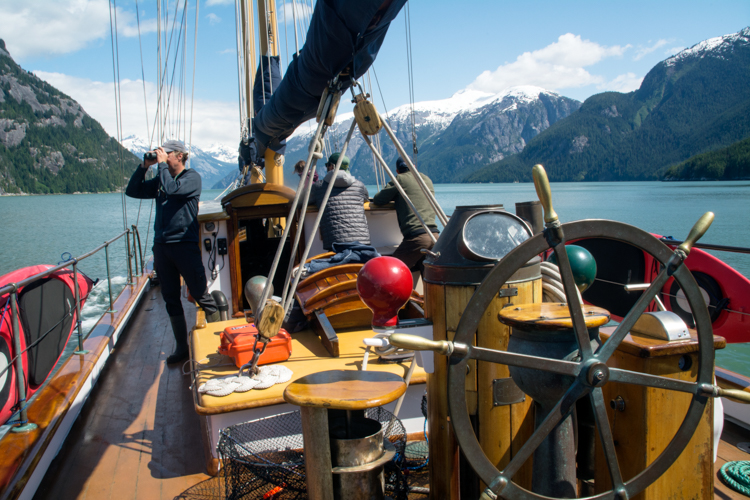 We are in zodiacs, cutting a frothing wake against a torrent of snowmelt running into the sea. Our boats veer towards land and approach the edge of a wide estuary, its banks rising several feet above us.

After tying to a slab of driftwood on the riverbank, one of our guides disappears cautiously over the horizon with binoculars in hand. A minute later he re-appears and waves us up.

Atop the estuary, the scene transforms. We find ourselves wading knee-deep through a symphony of grasses, sedges and wildflowers – all of them bathed in the warm light of the afternoon sun.

Fresh Grizzly bear tracks appear. As do those of moose and wolf.

As the scene widens to take in hefty mountains, deep valleys and the nearby ocean, my mind reels at the fact that people once lived here.

We are at the mouth of the Kitlope River Valley, deep in Haisla First Nation territory. This achingly pristine ecosystem is situated in the fabled Great Bear Rainforest of British Columbia’s central and north coast.

Over the last three years, I’ve been exploring the mossy interstices of this vast, labyrinthine region. For just as long I’ve wanted to visit this very corner, spoken of as the jewel-in-the-crown of the Great Bear. 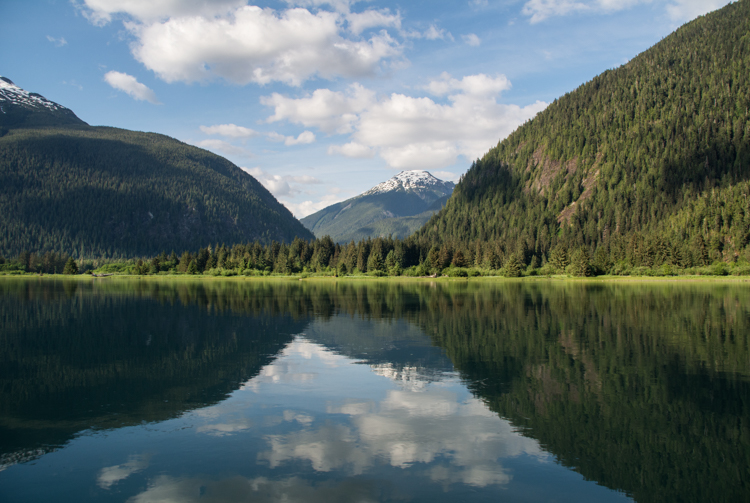 The estuary we’re exploring is on the edge of the Kitlope Heritage Conservancy (known simply as “The Kitlope”) – a 3,200 square kilometer park tucked inside the province’s Coast Mountains.

In 1994, the Haisla succeeded in protecting the Kitlope from clear-cut logging. The intervention was more than warranted. The park’s woodlands form the largest continuous tract of temperate rainforest, not just in the Great Bear but also the entire world. Even the area’s name in the Haisla dialect, translating to “Source of the milky blue waters” (owing to the glacial silt carried to the sea by the area’s rivers), conjures an image that needs to be seen to believed.

It is for this reason that Kitlope is imbued with a powerful mystique. And like other parts of this remote coast, it is nearly impossible to access without a boat.

So when an opportunity arose to join 12 others in an expedition to the Kitlope aboard ‘Maple Leaf’, a century-old schooner run by Maple Leaf Adventures, I jumped.

Our plan was to reach the mouth of the Kitlope River after travelling the length of the Gardner Canal – a fjord-lined Pacific inlet at whose end the park lies. Once there, we would continue upstream in zodiacs to Kitlope Lake and possibly beyond, into the area’s tributary system, a veritable terra incognita.

But there was a catch. Many an attempt to reach Kitlope Lake, and beyond, has been frustrated because the river is often too shallow for outboard motors. Maple Leaf’s resident naturalist, Briony Penn, a veteran explorer of the coast, tried four times in the past to reach the lake without success.

“We’ll make it upriver in one of two ways,” she said. “Either if it rains. Or if it stays warm enough that the river level rises with snowmelt from the mountaintops. And right now there’s no rain in the forecast.”

Luck, we realized, would need to play its part.

Our shaky optimism got a boost by a visit to the dock by Cecil Paul – an 82 year-old Haisla elder. Cecil spearheaded the campaign to protect the Kitlope and is the last living person to have been born there. 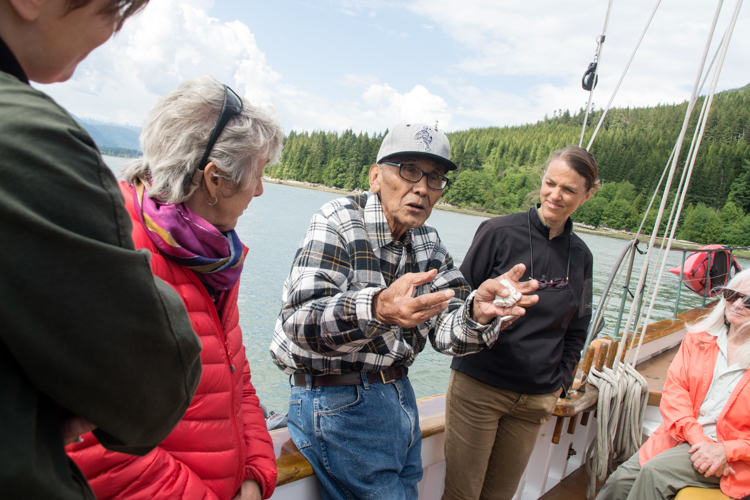 He wished us well on our trip to Kitlope Lake, which he called “The Cathedral”, and told us to remain alert on our journey.

“Wash your eyes and ears when you reach the lake so you can take everything in clearly,” he instructed us.

None of us took his words lightly. Cecil was a man brimming with wisdom and insight. By an uncanny serendipity known to attach to both him and this coast, he managed to locate and bring home a Haisla totem pole stolen in 1929 and hidden in a museum half a world away.

We bid Cecil farewell and set off that same day.

From Kitamaat, we travelled south along the Douglas Channel, through Devastation Channel, and into the mouth of 90km Gardner Canal – the longest fjord on the B.C. coast.

It was only on the second day, after emerging from a long lunch below deck, that we realized what we were heading into.

Gone suddenly were previously the misty skies, the conical green mountains, and occasional clear-cuts – all a minor opening act that had exited stage left during our meal.

In its place we found a very different landscape. One that was steely and absolute.

Granite walls rose straight up from the sea, towering thousands of feet above us. Their snowcaps resembled a cake’s hard icing. Thin ribbons of waterfall curtained almost every precipice, tumbling onto tree-choked niches of rock. Even the colour of the ocean had transformed into an opaque turquoise (the Haisla’s “milky blue waters”).

Here two ecosystems, the coastal and interior, collided and intertwined to produce a hybrid filigree of the two.

“In a land of superlatives, this region is the superlative of superlatives,” one of the co-owners of the Maple Leaf said to me of the Kitlope just weeks before. It was a description I couldn’t appreciate until I was there to see it in person. By coincidence, Greg Shea, our captain, repeated that observation to me with a big smile, while watching mountain goats on rock walls above us through his binoculars.

At this point let me say that everyone had a specific reason for coming on this trip. Some were drawn by the prospect of seeing whales. For others, it was to photograph a bear, or just to be on the schooner.

Mine was to dwell in landscape. In fact, part of my obsession with the Great Bear Rainforest involves its haunting, ineffable outlines. As we moved into the Kitlope, it was a preoccupation we all began to share in equal measure. 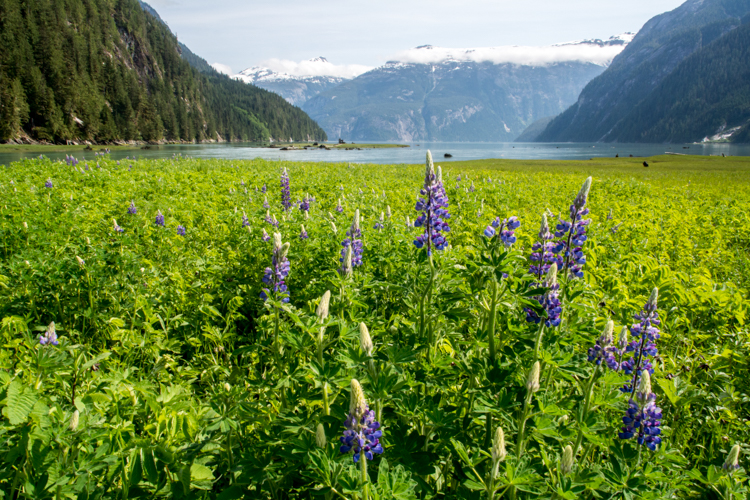 But why, I wondered, are we so drawn to these perfected landscapes that some of us would label “mystical”? What is the power that idyllic nature holds over us – beyond its beauty? What drives so many of us to make these pilgrimages every year?

As with most things, there isn’t just one answer.

Of course, it’s in our nature to be in nature. It’s inherently good for us: good for our bodies and brains.

We crave the emotional charge, the state of trance that comes with experiencing awe – with feeling small. We also feel more alive and alert moving through new and challenging surroundings. There are many reasons.

But as I continued to observe my reactions, and those of others around me, I couldn’t help but sense these were just secondary explanations. There had to be another more fundamental reason. 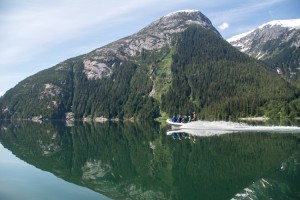 An idea by Swiss-born philosopher Alain de Botton returned to me as we travelled in the zodiacs past the estuary, past Cecil’s stunning lake (“The Cathedral” – which the swollen river had allowed us to access), and beyond into the Kitlope’s deep matrix of mountains and valleys. It came to me after we washed our eyes and ears, as Cecil had advised.

What if we were to see the objects in nature as not just as the things that they are – but also as qualities, or virtues that they embody?

Moving up the Tezwa River, a tributary of the Kitlope, you could see strength in the mountains; determination in the trees growing on their precipitous cliffs; and cheerfulness in the wildflowers of the estuaries.

There were other, subtler, qualities. Take rhythm, for example. The Chinese philosopher Lao Tzu once wrote, “Nature does not hurry, yet everything is accomplished.” These scenes, unfolding with calm and patience, stand in contrast with our often-frenetic lives, where we often hurry yet little is accomplished properly.

Nature has many components, but its essence is single – whole. We, on the other hand suffer from fragmentation, from competing desires, and from battling selves. We sometimes try and become what we are not. Nature doesn’t.

Could it be that we seek nature, perfect nature, idyllic landscapes also because the qualities that nature embodies are also virtues we deeply yearn in ourselves?

Later that day, we returned to the schooner. Our journey back to Kitamaat, along a different route taking us through the outside coast, brought us into contact with whales and more lofty vistas.

Through it all the word “cathedral” stayed with me. It came to me again on the flight home, as my plane coincidentally passed directly over the Kitlope and its sparkling lake.

It was then that I realized Cecil’s choice of word held yet another answer to my question. 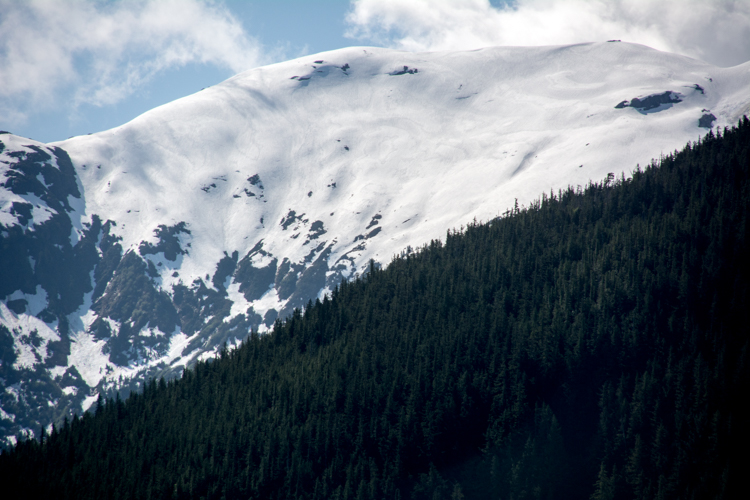 To look upon an idyllic landscape elicits the wonder of seeing something uniquely perfected. The architectural wonders of the Renaissance, Europe’s gothic cathedrals, and medieval Islam’s great mosques, all with their organic designs and motifs, were meant to evoke the grandiosity and complexity of nature. One might even say their builders tried to mimic the psychological impact of nature.

Why? To create a bridge to something higher. Something ineffable.

Any sublime nature scene demonstrates deep interconnections and conveys a sense of infinity at a junction where infinity ends and some other measure of things begins.

This sense of refinement approaching perfection, I believe, is the underlying quality, the fundamental virtue we yearn for in nature. It’s what we’re drawn to in an idyllic landscape.

Conservation of nature in Canada, and elsewhere, may not just be important to maintain ecology, or an ancient cultural context. Perhaps we also need to conserve some places, in their perfection, for their power of metaphor.

Areas like the Kitlope not only serve to remind us of our deepest origins, but also nudge us towards that which we strive to become. 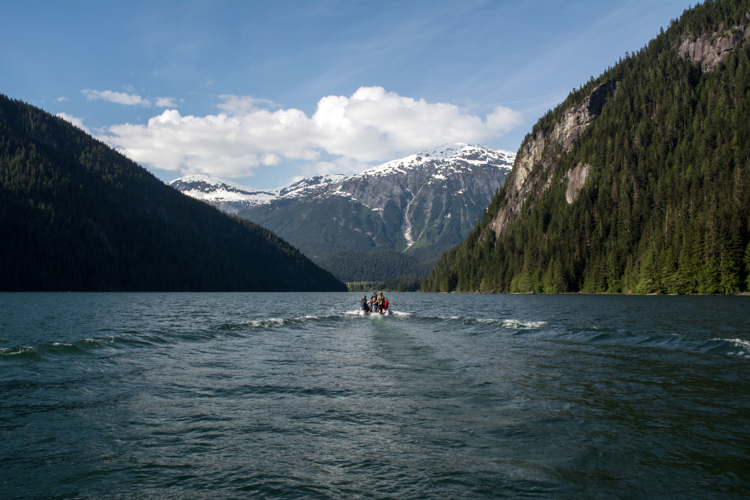 This article ran on the Canadian travel blog Toque & Canoe on March 16, 2016.