The Most Important Nowhere on Earth 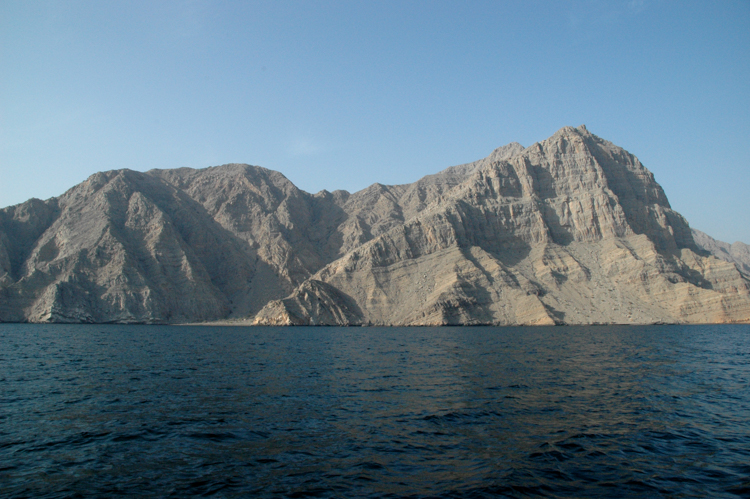 In brackish Arabic laced with Farsi and Hindi, Captain Abdul-Fatah al-Shehi orders a young deckhand to steer his boat along a sharp bend in the coastline. As the wooden dhow veers from the open water into a rocky inlet, al-Shehi grins with satisfaction, the vessel now navigating a course of placid water between two desolate mountains rising sharply from the Persian Gulf.

“Do you have something like this where you are from?” al-Shehi asks in heavily accented English.

On the horn of the Arabian Peninsula, the Musandam region is a place characterized by – of all things – fjords. These coastal mountains, barren and fissured, are the Middle East’s answer to the giants that guard the coasts of Alaska, Norway and Greenland. Though less grandiose than their cousins, Musandam’s fjords are an enchanting feature of an area full of strange and intriguing oddities.

Part of the Sultanate of Oman but separated by a 70km strip of the United Arab to the south, the Musandam Peninsula remains an enclave of nature and traditional Arab culture on the fringes of Dubai’s mega-urbanization project. Here steep mountain-hugging paths, isolated coastal villages, and an endless series of wadis where lone Shihuh tribesman shepherd their small flocks of goat, exist in a centuries-old time-warp.

This rocky headland of the Hajar Mountains also happens to be one of the most strategically important points on the planet: the rugged cape guards the southern side of the Straits of Hormuz, where the Persian Gulf narrows between Oman and Iran into a busy thoroughfare that sees 90 per cent of the Gulf’s oil transit to the Indian Ocean and beyond.

Despite, or perhaps because of, the geopolitics of the area, Musandam is one of the quietest and most pristine areas in the Middle East. Its deep blue waters are home to thriving coral reefs, and countless other marine species, including whale sharks and dolphins. And so inaccessible is the peninsula’s mountainous interior that it is believed to hide a small population of the elusive and critically endangered Arabian leopard. 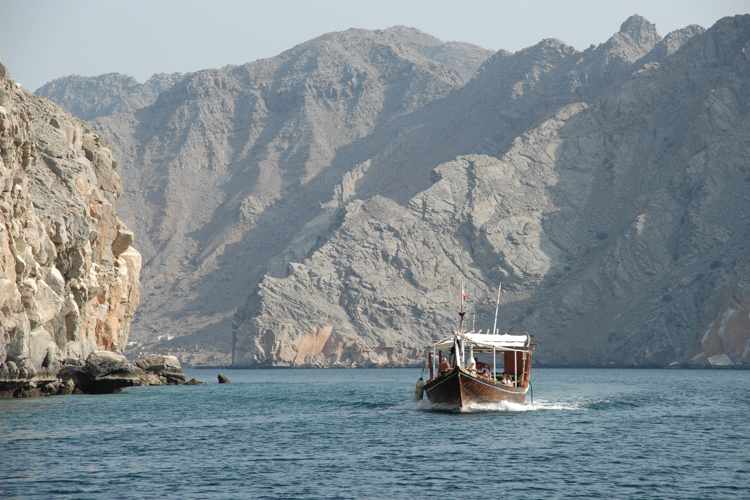 Once a military zone largely off limits to foreigners, the area was opened to travellers in the late 1990s to attract some of the burgeoning tourist activity taking place across the border in the United Arab Emirates. Soon afterward, local businessman such as al-Shehi, emerged from Musandam’s quieter nooks to take advantage of the windfall.

“Before the foreigners came, I had only one dhow boat that I used only to catch fish,” says al-Shehi, whose Musandam Sea Adventure Tour Company, is based in Khasab, Musandam’s capital. “Eventually this one boat became four, and now we make many runs a day from the port.”

Nestled in a wadi full of palm groves between the mountains and the sea, Khasab feels entirely cut off from the world. But its small port bustles day and night. As al-Shehi quietly points out to us while we are still moored, the area is teeming with Iranian smugglers – a big part of the local economy. They come to purchase commercial goods in Khasab by day – cigarettes, televisions, stereos, DVD players, refrigerators and almost anything one can find in the town’s market – then carry them across the Gulf to southern Iran in speedboats by night, carefully avoiding detection by the Iranian police boats that wait in ambush on the other side.

“It’s a very dangerous job,” al-Shehi says. “Two years ago some smugglers were killed by pirates in Iranian waters – local criminals, hired by the police to stop these people.”

Parked near the speed-boats are the much slower-moving dhows that are owned and manned by Omani sailors. These wooden craft, some of them examples of ancient designs and building practices, constitute one of the oldest continuous seafaring traditions in existence. The waters off the Arabian coast are dotted with these vessels, which carry their cargo as far away as India and Pakistan.

Of course, in recent years, sailors such as al-Shehi have also become tour guides, refurbishing their boats with cushions and light canopies to ferrying travelers comfortably along the Peninsula’s circuitous coastline.

He sees it as a sustainable industry and is keenly aware of the area’s environmental sensitivity.

“It is a business, yes, but we also want travelers to continue to appreciate the beauty here,” he says. “We value nature and are working to protect it – unlike what is happening in other parts of the region.”

His dhow comes to a stop a few hours later at the end of the fjord and moors beside a tiny islet known as Telegraph Island. This, he explains, was once the site of a strategic base where the British Empire’s telegraph lines connected London with the Indian subcontinent.

The coral reef below hosts a riot of colourful fish. The passengers are handed snorkeling gear and given 45 minutes to enjoy the show while al-Shehi prepares a lunch of fish biryani and other local delights prepared beforehand by his wife.

“Maybe these fjords are not as large as the ones you know,” al-Shehi says while heating up the biryani. “But I’m sure you will not find another fjord in the world where you can do what we are doing here right now.”