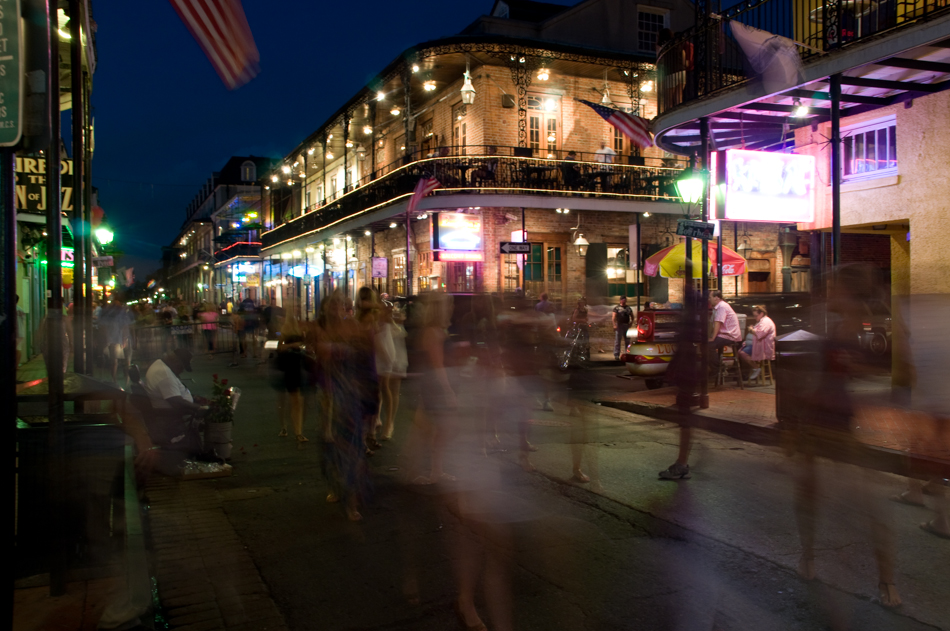 Along Bourbon Street, the night is reaching its crescendo. Groups of partygoers pass by scores of live-music joints overflowing with clientele. Men in red uniforms wheeling food carts serve the empty-bellied, while calling out their culinary offerings in thick Louisiana accents: “Po-Boys!”, Jambalaya!”, “Muffulettas!” A few blocks away, a small crowd stands transfixed at the entrance to a jazz club, swaying to the music and oblivious to all else going on around them.

Moving a few steps back to take in the scene, I find myself beside a cabaret dancer decked out in all her finery. She’s holding a cigarette in one hand and a mobile phone in the other.

New Orleans is not quite what I expected. Not only is the city in its sweltering, off-peak summer period. But the worst oil spill in American history, in the adjacent Gulf of Mexico, continues to flow unabated. So far, some 200 million gallons of crude have contaminated nearby wetlands and fishing areas threatening the livelihoods of fishermen and all those reliant on tourism. Not to mention the fact that New Orleans is still dealing with the catastrophic impact of Hurricane Katrina.

Tomorrow, the city will be marking the day, exactly five years ago, when one of the most deadly storms ever to hit the United States made landfall to the east of the city, sending a surge of seawater barrelling over the levees. Eighty per cent of New Orleans was inundated in up to six metres of water. More than 700 people died, and many who had fled the path of the storm found themselves dispossessed, their homes destroyed.

In light of these calamities, it has become easy to imagine New Orleans as a city in the grips of despair. Not so. As a tourist, you’d hardly realise that an apocalypse had come to call. The French Quarter and its neighbouring districts (the areas least affected by the storm) have retained all of the qualities that have so fixed them in the world’s imagination: the pastel cottages and shotgun houses; breezes carrying the scents of jasmine, cigar and fried catfish; crowds of tourists running the gauntlet of stores; the horse-drawn buggies and marching bands. Here is the famous, sultry southern capital bursting with all of the flavour and richness of a city that arose from such eclectic beginnings.

And don’t take a traveller’s word for it. Both local and state officials point to positive signs that the city’s reconstruction and recovery is more than just a product of wishful thinking. Ninety percent of the city’s pre-Katrina population has rebounded, and 85 per cent of the jobs have returned. Tourism has nearly doubled – from 3.7 million visitors in 2006 to 7.5 million in 2009. Most neighbourhoods near the higher ground have been entirely refurbished. Districts like the Lower Ninth Ward and Gentilly, which bore the brunt of the catastrophe and which remain in disrepair, have been recovering, albeit slowly. 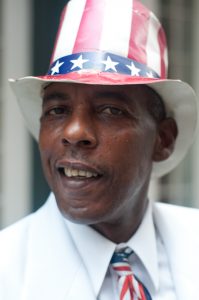 “We’ve come a long way since the storm,” says “Uncle Louie”, a street performer who’s worked the city for nearly two decades. “It was looking real bad there for a few years. But the town’s being reinvented and the visitors have come back. Most importantly the vibe’s still here.”

Having finally made it to “The Big Easy”, I wanted to take in as much of it as I could, and access some of the more genuine areas beyond the popular French Quarter. In order to cover more ground and avoid walking in the stifling summer heat, I took to renting a bicycle. My plan was to explore some of the varied cultural offerings in the French Quarter and move outwards from there.

I spent a few days cruising through the old town, on the lookout for one of New Orleans’s most common breed of character: the musician. At any given time, one can find both professional and amateur bands performing in a variety of genres, ranging from Cajun, to Zydeco, to Brass and Jazz. From impromptu street performances to the perennial Mardi Gras carnival, the love of music and celebration are the defining features of the city’s soul.

“Music’s in our blood. It’s a life force here,” says Barbara Katz, an antiques dealer who moved to New Orleans in 1970s. “The musical vibe here is so momentous that it just grips you. People who come to visit either keep coming back – or they never leave.”

Though the city is best known for its jazz and brass music scenes, some of the most locally authentic grooves come from the Cajun and Zydeco traditions – the old music of rural southern Louisiana. Cajun music was created by the white descendents of French Acadians from Eastern Canada; and Zydeco by the French-speaking African-Americans. Fiddles, accordions, and guitars make up these musical ensembles and the melodies have an ambient and almost trance-like quality to them. The superstars of these traditions, including a band called BeauSoliel, come from the Cajun heartland, in, or around, the city of Lafayette – a few hours to the west of New Orleans.

Running parallel with the musical rhythms of the city are its culinary flavours. New Orleans’s cuisine is world famous – and nothing short of delicious. Endless permutations of seafood dishes draw upon centuries-old French, Afro-Caribbean, Cajun and Creole recipes. Saucy and succulent dishes like gumbo, jambalayas and étouffées (spicy, Cajun gravy dishes) are hallmarks of a cuisine so varied and, at the same time, so region-specific, that state tourism officials have created what they call “culinary trails” for visitors who come to Louisiana just to partake in its cuisine.

“If you go to a Louisiana zoo, you’ll see a plaque beside each animal with its name written there, and beneath it a recipe on how to cook it,” says Brian Champagne, a burly swamp-tour operator. “That’s how much we love food.”

Among the area’s specialties is the crawfish, which is a small crustacean that looks like a lobster and measures as long as one’s index finger. Crawfish, also known locally as “crawdaddies” and “mudbugs”, live in fresh water streams, and are also farmed commercially. As my visit took place at the height of crawfish season, I made it my mission to try as many variations of the dish as I could. 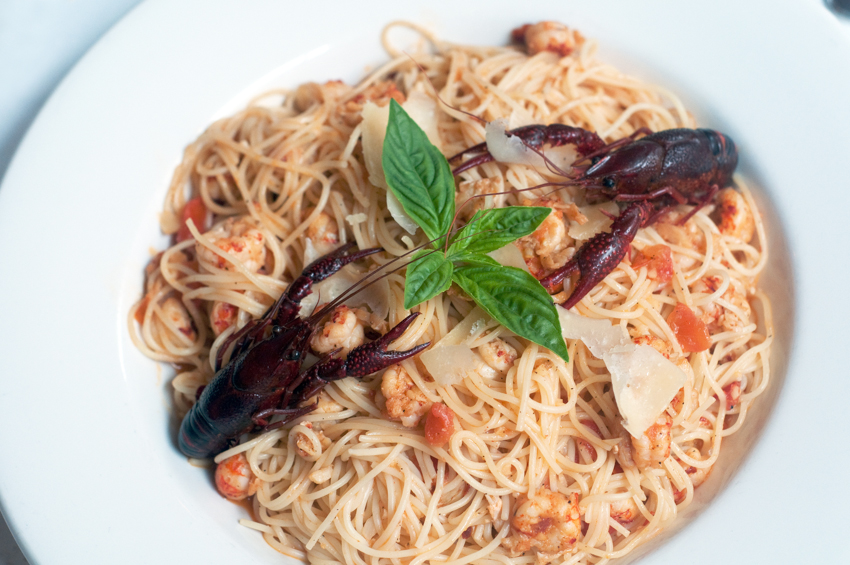 Fresh-boiled crawfish, seasoned with Cajun spices (you eat the crawfish by breaking off the end of the tail and consuming the meaty insides), is the most popular of the crawfish recipes. At Dickie Brennan’s Bourbon House, one of the best restaurants in New Orleans, I also sampled a delicious, and artfully concocted, crawfish marinara pasta, as well as crawfish beignets (balls of crawfish meat, battered and deep fried).

Despite the blossoming gastronomical scene and the explosion of food establishments in New Orleans, these are not the best times in the city’s culinary life. The BP oil spill is raising questions about the safety of Louisiana’s seafood. Opinions vary on how widespread and potentially destructive the oil slick is to the area’s marine life. But many workers who make a living supplying the city’s dinner tables and restaurants with some of the best seafood in the world, have found production stalled, and their jobs hanging in the balance.

Yet, officials in Louisiana remain somewhat optimistic that their culinary culture remains at arms length from imperilment. They say that a combination of rigorous testing and harvesting from unaffected areas still makes the area’s seafood safe to eat. Further optimism stems from the fact that inshore species important to Louisiana’s food culture, such as catfish, crawfish and alligator, remain out of range of the leak.

“Even though the product is being checked heavily, the public is cautious and wary,” says William C. Hudlow III, a manager at the Bourbon House. “We will always have fresh Gulf seafood in our restaurant. But, we’re going to have to ask more questions of our purveyors. We’re being as positive as we can.”

With the leaking BP oil well now plugged, and with some of the oil having reportedly been broken down, evaporated or otherwise “vanished”, the city waits to see what the long-term effects will be on the surrounding region and its seafood.

Leaving the eateries of the French Quarter behind, I next rode east, hugging the curve of the murky Mississippi, to the Bohemian enclaves of Faubourg-Marigny and Bywater. Located side-by-side, these are working-class, residential neighborhoods that date back to the 1840s. The two districts are sometimes referred to together as “Marigny-Bywater.” In the last 10 years the area has undergone a kind of renaissance as students, artists, musicians and out-of-towners have flocked to the area. What was once a crime-ridden and somewhat impoverished neighborhood has become a cohesive and upbeat community hosting a small collection of stylish art galleries, coffee shops, bars and restaurants.

“Lots of people have come here as part of an influx to help the city bounce back,” says Bywater resident and photographer, Christopher Porsché West. “There’s a nice mix of people here – some who’ve been here a while, and others who are creating new affinities to a city. It’s a dynamic process that is helping New Orleans return to life.”

Porsché West is one of the neighborhood’s adopted sons. He made his mark in the 1980s as a photographer with his documentary portraits of the area’s colored and indigenous peoples. After leaving his commercial work in California in the 1990s, he moved to New Orleans and took up residence in the Bywater. He has since been creating sculptures out of his photographs by building elaborate wooden frames made from various knick-knacks that were rummaged, or donated by friends.

By night, the musical muses come out and Marigny-Bywater’s residents can be found congregating at any one of a handful of bars scattered around the neighbourhood. Every Thursday night, New Orleans jazz trumpeter Kermit Ruffins and his Barbecue Swingers are featured at Vaughan’s Lounge – a way-down-home venue located at the far end of The Bywater. Ruffins is considered a musical genius and is a celebrity in New Orleans. His weekly performances draw huge crowds of fans (including famous musicians, and Hollywood movie stars) that spill out onto the streets of this otherwise quiet residential corner. 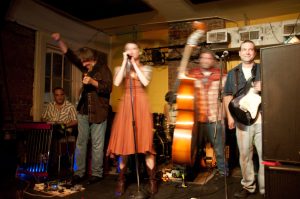 The musical performances in this part of town tend to be small and intimate affairs. And though far less active than the frenetic French Quarter, the area’s residents say the neighborhood offers better and more cutting-edge music.

“Marigny-Bywater is much more geared towards bands,” says Vanessa Niemann, a Maryland native and the lead singer of Gal Holiday and the Honky Tonk Review. “The French Quarter is all about Dixieland and Jazz. The scene on this side of the tracks is much more raw.”

Later that night at The Blue Nile, a popular music club located on the raucous Frenchman Street, Gal Holiday and the Honky Tonk Review play to a packed house of music worshippers. After a few songs the crowd moves to the edge of the stage, where people pair up, waltzing to the group’s vintage brand of Western Swing and hardcore Country. During a break in the show I ask Niemann, an out-of-towner, what’s kept her in New Orleans through all of the city’s difficulties.

“It’s the warmth of acceptance here,” she told me. “You can be whoever you want to be and people don’t look at you strange, or think you’re a freak. We’re here because this is a party town and everybody down here likes to have a good time.”

Just as she wrapped up her words, a fan in the crowd yelled out the the city’s old French catchphrase and official motto, “Laissez le bon temps rouler!” (Let the good times roll!). At that moment, there was no doubt in my mind that New Orleans would not just persevere, but would once again thrive.

This story appeared in the August 28th, 2010 edition of The National newspaper.