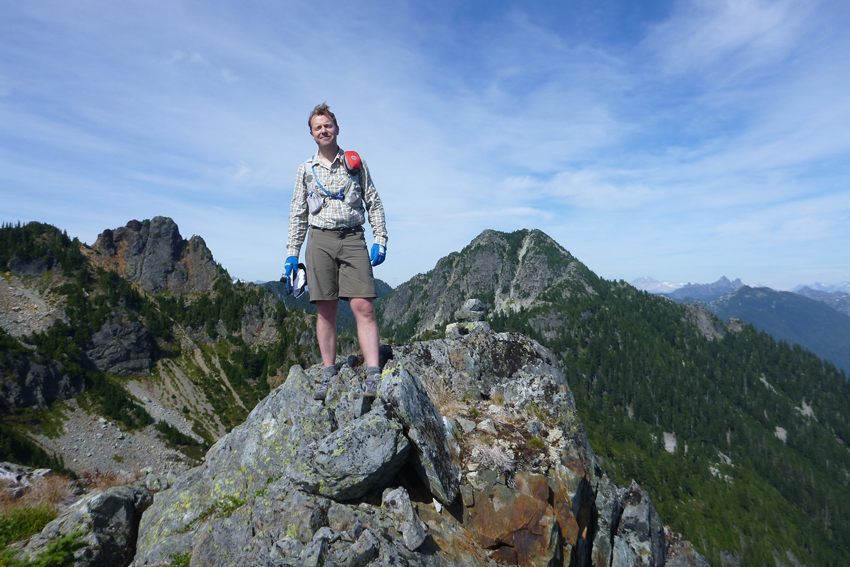 David Crerar on The Glorious Mountains

David Crerar, a Vancouverite, has spent decades exploring the city’s North Shore Mountains—partly as a long-distance trail and adventure runner. As Crerar became better acquainted with that section of backcountry, he found that there was little known about its mountains beyond the more popular hikes and peaks closest to the city. As a result, he set out to write a comprehensive hiking guidebook for the area listing as many summits, and their approaches, as could be compiled.

In 2018, Crerar along with his son Harry and friend Bill Maurer published, The Glorious Mountains of Vancouver’s North Shore: A Peakbagger’s Guide. Packed with every possible factoid and informational tidbit, the book is one of the best guides for navigating and reaching the many summits on Vancouver’s rugged North Shore.

I spoke with Crerar to find our more the process of writing and compiling the book, and his reasons for doing so.

There are a handful of well-known hiking guides that cover the area that you do. How does your book differ from the others?

The main difference between The Glorious Mountains and the other hiking guides that include Vancouver’s North Shore, is that ours focusses on reaching mountain peaks and is more of an encyclopedic reference to the area.

How exactly did you come to write the book?

In 2009, I came up with an idea to hold an event called ‘The Bagger Challenge’ to see who could climb the most peaks, from a list of mountains, over an entire summer on the North Shore. I had to compile a list of summits for that event. I figured there would be a book to summarize these. I had the standard hiking books, but was surprised to find out that there was no comprehensive profile of the North Shore Mountains. And there also wasn’t much to be found online. I was only able to cobble together 25 named peaks. 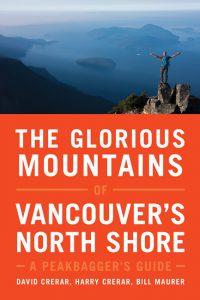 That put a bee in my bonnet to fill in the blanks. As the contest rolled over for subsequent years, I did more digging for peak names we could add to the event. I spent hours in the archives and read everything that was available on the North Shore peaks—historically and recreationally. I thought to myself: this is shameful that no one has ever really profiled these peaks systematically, not only for their climbing opportunities and natural beauty, but also because they define Vancouver culture. I’m a fairly stubborn person who likes a good project, so I hunkered down and wrote The Glorious Mountains with my other two co-authors.

Since we published the book, there have been a few more names added to the list of mountains. If and when we do a 2nd edition, we’ll have a total of around 82 named peaks.

The word ‘Glorious’ in your title refers to a certain quality to these mountains, but there’s another reason you chose that word. Tell me about that.

There was a naval battle that took place in 1794 between Great Britain and France called ‘The Glorious First of June.’ That event inspired many of the names of these peaks—especially in and above Howe Sound—coined by Captain George Vancouver and Captain Richards who came through in 1859 and 1860. Richards was an avid scholar of British admiralty history and so he named some of these mountains for ships, admirals and other figures involved in that particular battle.

Describe Vancouver’s North Shore Mountains. What makes the range special for you?

It’s an idiosyncratic place in that you’re so close to a city and yet you have so much wild area to explore. Boulder Colorado is the only other place that I can think of that is similar in that regard—where you have all the comforts of a biggish city but at the same time you can get completely lost in the backcountry.

In some of the places we explored to write the book, probably only ten people had ever stood where we were standing. And yet when you look at a map, you’ll notice that you’re only around 10km from your home address. You can have so much of that wonderful spine-tingling sense that you’re out in the wild and exploring a completely new area.

There are some stunning views in these peaks. There are beautiful waterfalls. There’s old growth forest. There’s industrial history too—you’ll come across mines and old logging sites from 120 years ago where you find pottery with Chinese and Japanese writing on them. It packs a lot of bang for its buck in terms of discoveries in your explorations.

There are warnings in the book about dangers tied to some of the climbs and routes. What should people consider when venturing into this area of the backcountry—even, and especially, those people who have some experience.

A little learning is a dangerous thing, isn’t it? The closeness of these mountains to your home is a blessing but also a trap. The weather can turn really quickly. The clouds that come off the Pacific get impaled on these mountains. Weather forecasts in Vancouver are not worth the paper they’re written on. Also, the mountains are all granite, often covered in a visible veneer of algae, so it can become very slippery.

The peaks we profile in The Glorious Mountains do not include those that require bona fide climbing or technical skills. Those that involve scrambling, or in which people have died, are flagged aggressively in the book. We’re killjoys in terms of profiling the West Lion or other peaks of that ilk. The local mountains are deceptive and dangerous. You can’t be too aggressive reminding people of the dangers.

You mentioned thunderstorms being a danger on the summits. You, and others, have had experiences with that.

I wasn’t directly hit by lightning, but I was knocked-out by a nearby thunderclap when I was hiking with my son and co-author Harry in Wells Gray Provincial Park. I was discombobulated when I came to after I banged my head on a rock and passed out. Harry wasn’t knocked out and he wisely led us out of that situation afterwards. We were on a peak at the end of a long saddle. The weather was perfectly fine until then—but then it suddenly changed. It’s worse in the Interior mountains of British Columbia than it is in the local mountains.

There’s a photo in the book of myself and my friend Mike Wardas who’s blissfully eating a sandwich and looking at a map on what was a sunny day with some slightly poor weather cloud cover far behind him. When I took the photo bells should have gone off in my head. Two minutes after that photo was taken there was an ‘Oh my God,’ moment. It was like Indiana Jones: we were running down the mountain to get to shelter as the thunder and lightning was all around us—with no time lag between the flashes and thunderclaps

On the other end of the pleasure-pain spectrum, whisky caches await hikers on some of the summits. What’s the story behind this?

We didn’t invent the whisky cache. A pair of brothers, Al and Dave Martin, did it first along the Howe Sound Crest Trail. I heard about it from a friend and started doing it during The Bagger Challenge.

I think most of the mountains in our book now have a whisky cache somewhere, either on the route, or mostly on the peak. I’ve added about 10 or so over the years. It’s a lovely thing. The word gets around. You’ll hear about rough or precise coordinates to find them. It’s like raising a glass for the people who’ve come before and after you in terms of climbing the mountain and thinking, ‘How fortunate to be alive now in this place with these beautiful mountains all around us.’ There’s a tradition here of Scotland and peak bagging and it’s appropriate in multiple ways to have the whisky there. 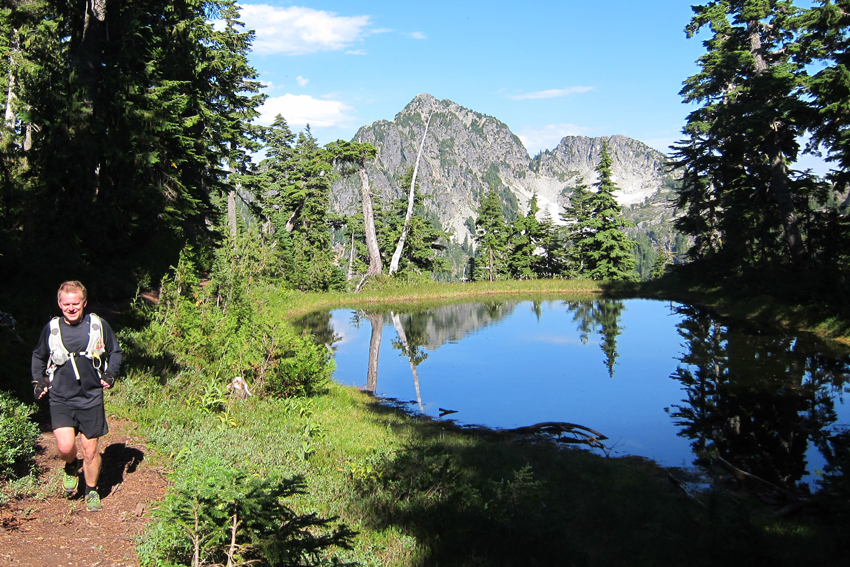 What sorts of discoveries did you make about the North Shore Mountains, as you explored the area, during your work on the book?

I suppose it was discovering the variety of the mountains themselves. We’ve all been up the front peaks and they’re all fairly similar. When you get behind that first range you could be anywhere on the coast. You’re not finding any glaciers in the area we profile. But there are permanent ice fields, waterfalls, rockslides, lakes and tarns and alpine meadows. You have spectacular untrammelled wilderness that is so close. In many cases you don’t really know what you’re going to see around the corner.

First Nations have been in the area long before any of the historical figures started exploring it. What sorts of facts did you uncover from your research about their knowledge of and relationship to the area?

I’m a real fan of history and did set out to have as much indigenous information about the mountains as possible. Again, the thing that struck me is that almost nothing has been written in that regard—whether formally in print or online. We conferred with all three local First Nations to find out more. Granted there are cultural, political and legal reasons why First Nations would want to divulge that information insofar as they have it.

There’s a very interesting article by Rudy Reimer, a professor at Simon Fraser University, who talks about the ‘Smaylilh’ which are supernatural beings that live in places of supernatural power like waterfalls and mountains. Reimer has another article about a quarry of obsidian up in the Garibaldi Provincial Park area. Obviously, there are also some indigenous trading routes that have some historical backing.

Generally, because these mountains were sacred up top, the people were not actively peaking or exploring—much in the same way that the Greeks wouldn’t go up Mount Olympus because they would tempt fate by doing that. The scholarship that exists so far by both indigenous and non-indigenous sources suggests that there was not active venturing into the mountains except maybe for vision quests or training for shaman and spiritual leaders who would be allowed by the collective to go up there.

David Crerar lives in Vancouver. His book The Glorious Mountains of Vancouver’s North Shore: A Peakbaggers’ Guide is published by Rocky Mountain Books and was co-written with Harry Crerar and Bill Maurer.

(photos by David and Harry Crerar).

Interviews and articles that touch on the theme of exploration.