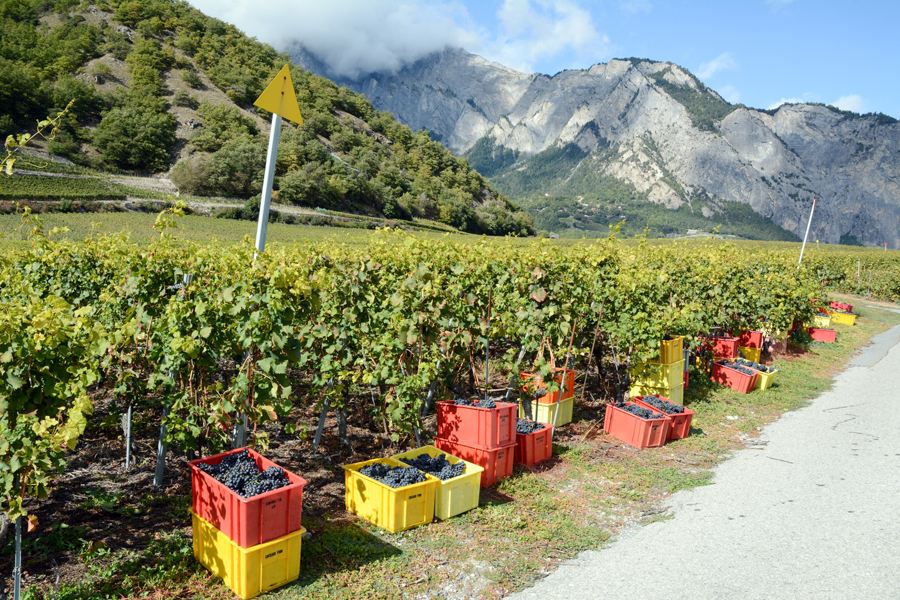 Mention Switzerland and a medley of associations come to mind: Gruyère cheese, Rolex watches, fine chocolate. What almost never factors into a conversation about this landlocked bulwark of neutrality is its wines: arguably Switzerland’s deepest secret. Surprisingly, the country produces around two million bottles per year, nearly all of which are consumed domestically.

Sommeliers and wine aficionados may sneer, but Switzerland’s viticulture has a long and storied history. The canton of Valais, in the southwest, produces some of the country’s best-known wines. Its warm, dry microclimate, often compared to the South of France, pairs with a special ingredient that gives the wine here its unique character: the mountains themselves. Because Valais straddles the collision point of tectonic plates that created the Alps, the region has inherited a rich mosaic of rock deposits and soils. Over 50 types of grapes are tended across the country’s whole Rhône Valley.

“You don’t find this variety in a place like France, whose regions tend to concentrate on just one or two types of grapes,” says Mathilde Roux, a 29-year-old winemaker from France and owner of Cave de L’Orlaya in the Swiss village of Fully. “I’ve located my business here because the conditions are just right, from climate to economy.”

A patchwork of vineyards, separated by dry stone terraces, extends across the valley’s north slopes as far as the eye can see. The steepness of the land precludes mechanization, so most of the grapes are tended and picked by hand.

Cutting a direct path through the vines on the lower slopes is the Chemin du Vignoble, or Valais Wine Trail. This 82-kilometre hiking route begins in the French-speaking town of Martigny in the west of the valley and ends in the Germanic village of Leuk. Made up of dirt trails, gravel paths, and sections of paved road, the route can be taken in sections, or hiked from end-to-end at a leisurely pace in approximately four days. 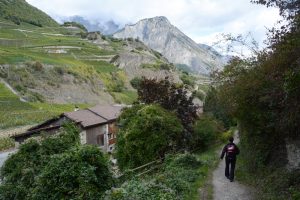 The vineyards in and around the slate-roofed villages of Martigny and Fully are adept at cultivating grapes that thrive in granite soils in the west of Valais. Among the more popular is the slightly effervescent fendant, a dry and mineral-tasting white that is often served with the regional delicacy of melted raclette cheese. The signature local grape and pride of Valais is another white, petite arvine, which produces a strong, idiosyncratic wine with exotic fruit flavours and a hint of sweetness that transitions into a minerally finish.

Along the trail, one reaches the community of Chamoson, the most prolific wine-producing town in Valais. In addition to large, sprawling grape plantations situated at the foot of craggy peaks, seemingly every home here has its own backyard vineyard. The town lives and breathes winemaking. During the harvest season in late September, the community becomes awash in the aromas of fermentation and stirs with the activity of grapepickers patiently combing the vines.

Hikers looking for a diversion from the main route can explore the area’s 11-kilometre Du Cep à la Cime side trail, which leads up to the higher-altitude vineyards and deciduous forests below the dramatic and often mist-covered Haut de Cry mountain. Completing that circuit, ramblers can treat themselves to some of area’s best wines at Domaine du Grand Brûlé in neighbouring Leytron—a 12-hectare vineyard and cellar that researches growing techniques on behalf of Valais’s winemakers.

Here, the plantation’s charismatic, red-bearded director Pierre-André Roduit uncorks his favourite Valais red—cornalin, a colourful, fruity wine with silky tannins—while praising the region’s wines to the skies. “Experts from around the world who visit us are baffled by our native grapes,” he says. “They can’t place them. Our wine exists in a different universe. Few know the treasure we have here.” But those who do are amply rewarded.

This story appeared in the Winter 2018 issue of Montecristo magazine.