Unalaska: The US Island Once Ruled By Russia

Unalaska Island is situated in the Aleutian archipelago where the North Pacific Ocean meets the Bearing Sea. It is home to the largest seafood and fishing port in the United States and is the shooting location for Discovery Channel’s hit reality series, ‘Deadliest Catch.’

The volcanic, windswept island – home of the indigenous Unangax people – was colonized by Russia before it was sold with the rest of Alaska to the US in 1867. For fifteen months during World War Two the Japanese military fought American and Canadian forces in the region in one of the least remembered episodes of the war.

Today, a trickle of intrepid tourists brave the week-long ferry journey from the mainland (you can also fly from Anchorage) to go whale-watching, kayaking and backcountry hiking along ancient indigenous trails winding between volcanic fjords. A surviving Russian church and cemetery containing original iconography are ever-present reminders of Unalaska’s location on the cusp of eastern Siberia. 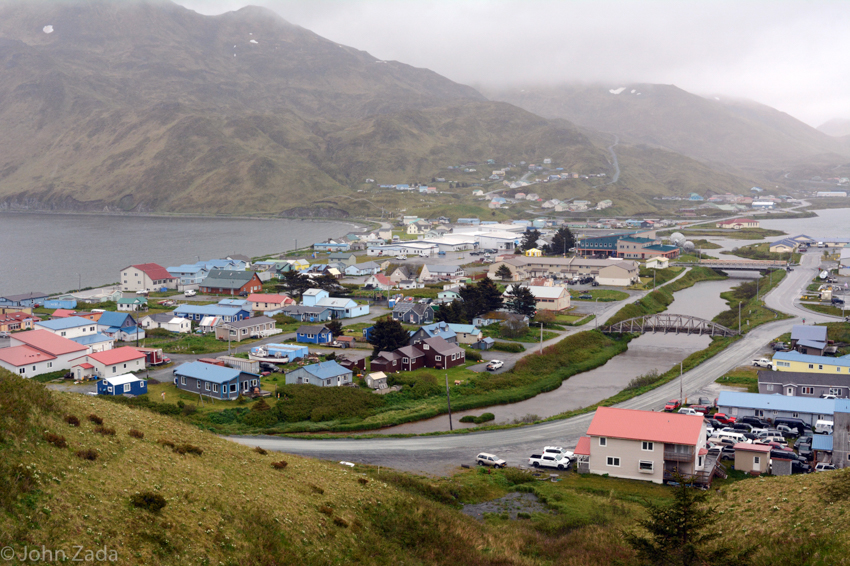 Situated in the Aleutian archipelago, Unalaska Island straddles the liminal zone where North America transitions into Siberia. The island lies further west than Hawaii, its position on the cusp of East Asia making it one of Alaska’s more remote and idiosyncratic communities. 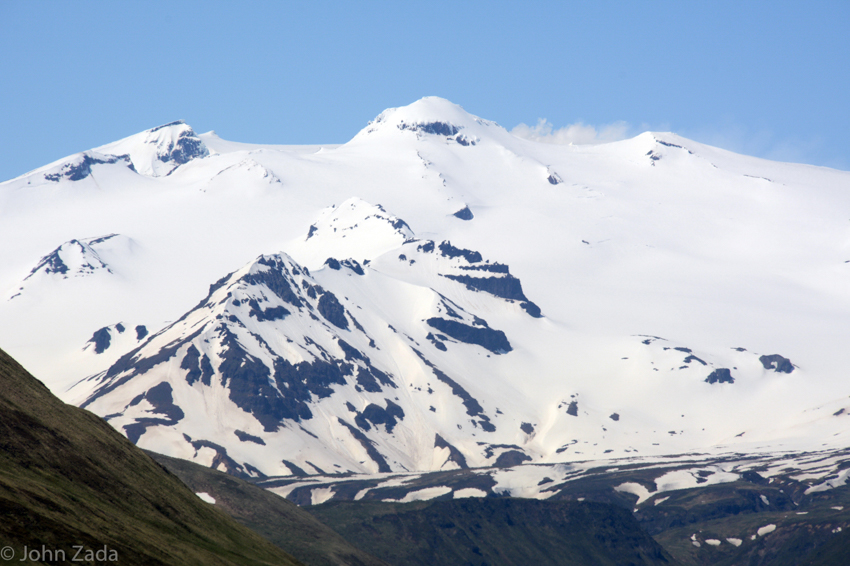 Part of the Aleutian Islands, a 1,100-mile volcanic archipelago curving in a westward arc to within 600 miles of Russia’s Kamchatka Peninsula, Unalaska features one of the harshest environments on the planet outside the polar regions. The windswept coastlines are rugged, often precipitous and almost entirely devoid of trees. It is also one of the most seismically active areas of the world – part of the Pacific Ring of Fire. Earthquakes in the region are ubiquitous, and half of the island chain’s 70 volcanoes, including Unalaska’s active Makushin Volcano shown here, have erupted in the last 250 years. ‘Cradle of Storms’ and ‘Birthplace of Winds’ are two well-deserved nicknames for the Aleutians. Conflicting weather systems generated in neighbouring seas result in cyclonic storms, hurricane-force winds, heavy rain and dense fog that have a considerable impact upon weather across much of Canada and the continental US. 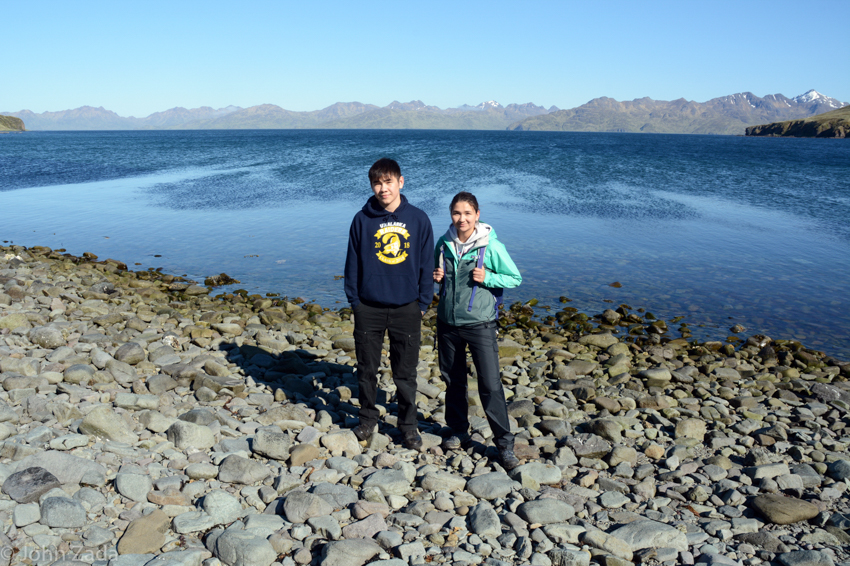 Today around 5,000 people call Unalaska home, including the Unangax people (pronounced Oo-Nung-akhh), the indigenous inhabitants of the Aleutian Islands. Also referred to as the Aleuts, the Unangax have lived in the archipelago and parts of the Alaska Peninsula for at least 9,000 years, creating a subsistence lifestyle that drew upon every resource that the land and sea offered. But over the past several centuries, the Unangax population has plummeted due to the disease and the gradual attrition of their culture that came on the heels of colonialism. Today there are around 3,800 Unangax worldwide (half of whom reside in Alaska and the Aleutian Islands). Shayla Shaishnikoff, 24, and her brother Talon Shaishnikoff, 17, are among the 200 or so who still live on Unalaska. Around 100 Unangax, mostly elders, remain fluent in the Unangax language – an endangered tongue known as Unangam tunuu. 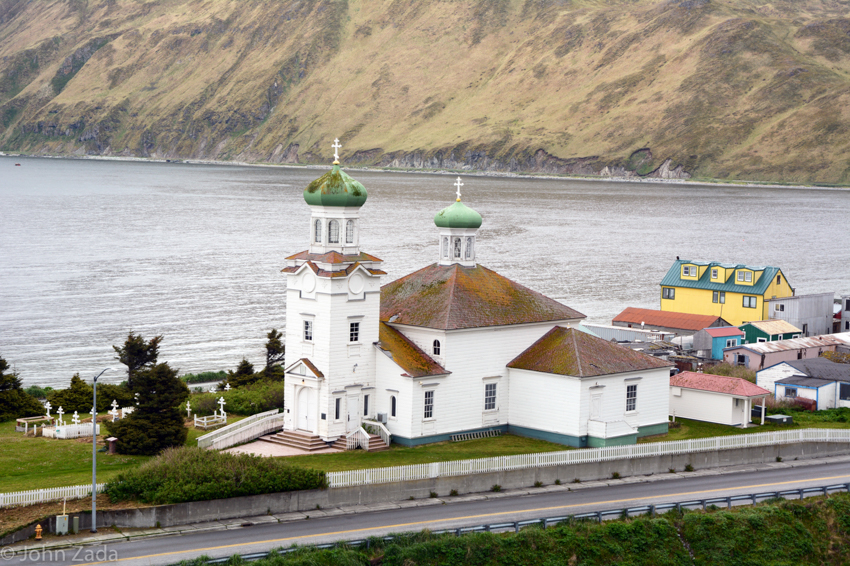 After Danish explorer Vitus Bering and his Russian colleague Alexei Chirikov became the first known Europeans to visit the Aleutian Islands in 1741, waves of Russian fur traders flocked to the archipelago to hunt sea otters and fur seals. By the late 1700s, the islands became a colony of the Russian Empire. Today many inhabitants of the island still have Russian surnames. The Russian Orthodox Church followed the fur hunters, building small houses of worship across the islands and converting many Unangax to their faith. Although the United States gained control of the Aleutian Islands when it purchased Alaska from Russia in 1867, the Russian Orthodox legacy has survived. Unalaska’s Church of the Holy Ascension (pictured here) is one of a few Russian Orthodox houses of worship that remain. Built in 1895, it is the oldest cruciform-style cathedral in North America and contains original icons and interior sections from churches built on the same site in 1808 and 1825. 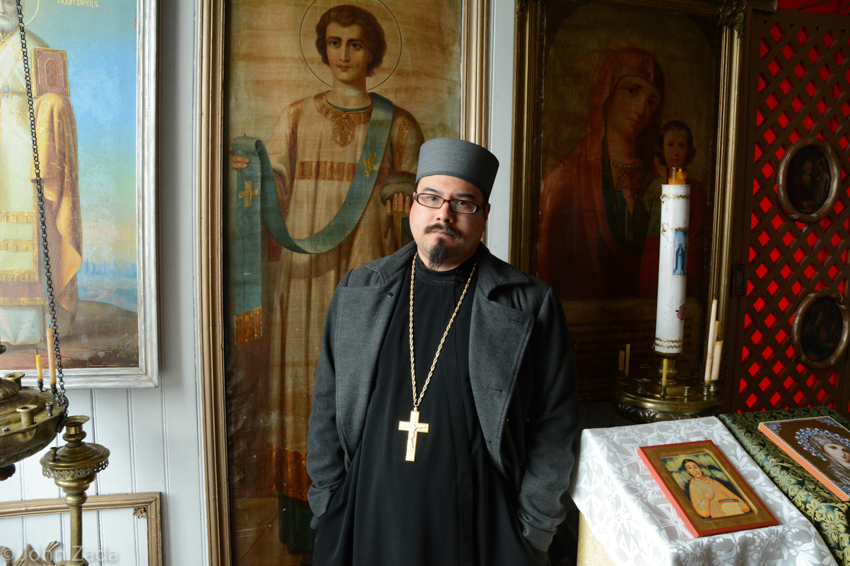 Thirty-six-year-old Reverend Evon Bereskin is the sole Christian Orthodox Priest in Unalaska and the keeper of the Church of the Holy Ascension. An Unangax, he took over the region’s Deanery in 2013 and now oversees all the parishes in the Aleutian islands of Unalaska, Nikolski and Akutan and the Pribilof Islands of St Paul and St George. “I am constantly in awe of the fact that I am the custodian of this incredible relic building,” he told me. “It’s an unbelievable honour and responsibility.” Since becoming the head of the church, Reverend Bereskin has begun raising funds to restore the church and its icons, which have suffered at the hands of time and the elements. He also changed the liturgy of his services to English (from the Unangax language and old Slavonic) to make services more accessible to worshippers. Yet while more than 100 Unalaskans living on the island today were baptised Orthodox, no more than a dozen or so attend Reverend Bereskin’s weekly services. 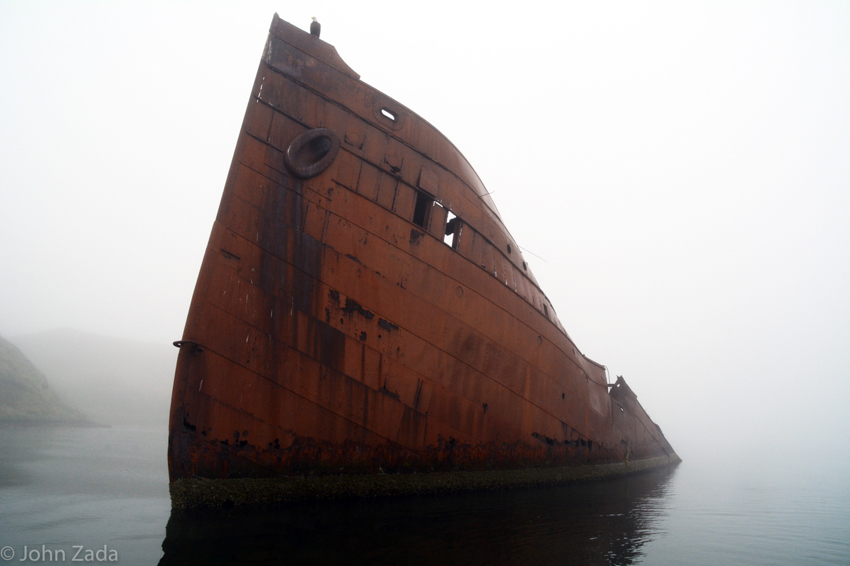 Prior to World War II, the US had a modest commercial and military presence on the Aleutian Islands. The Aleutians, lying relatively close to East Asia, were vulnerable to attack after Japan bombed Pearl Harbour. On June 3-4, 1942, planes from two Japanese aircraft carriers attacked Dutch Harbor in the village of Unalaska on the island’s northern coast, killing 50 people. Several days later Japanese forces invaded Kiska and Attu islands, the westernmost islands in the Aleutians (670 and 850 miles from Unalaska, respectively), in an attempt to inflict a psychological blow and divert US forces from the Central Pacific theatre, where the Battle of Midway Island was about to take place. It was the first invasion of US soil since the war of 1812. The SS Northwestern, a passenger and freight steamship used by the US Navy in the war, was destroyed in the Japanese attack on Dutch Harbor. Its rusted hull still rises above the water’s surface, a ghostly reminder of a bloody battle. 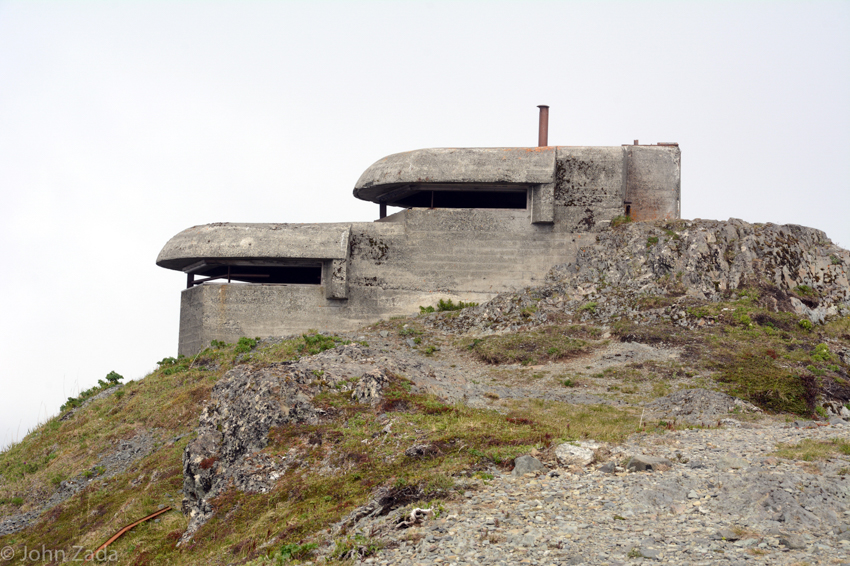 The Americans dug in after Japan’s invasion, sending reinforcements to Unalaska and securing the island with fortresses, artillery and bunkers such as the one pictured here on Bunker Hill above Dutch Harbor. A larger base overlooking Unalaska Bay and the Bering Sea a few miles away on nearby Mount Ballyhoo, known as Fort Schwatka, once housed 1,000 soldiers and 100 buildings and was built to withstand earthquakes and hurricane-force winds. Within months of the Dutch Harbor attack, 145,000 US and Canadian soldiers deployed to defend and retake the occupied Aleutians. Epic, harrowing battles were fought on bleak and difficult terrain. Thousands died on both sides of the conflict – many from exposure to the island’s harsh weather. By August 1943, the Japanese were expelled from the Aleutians, and as time has passed, the battles that took place here were largely forgotten. 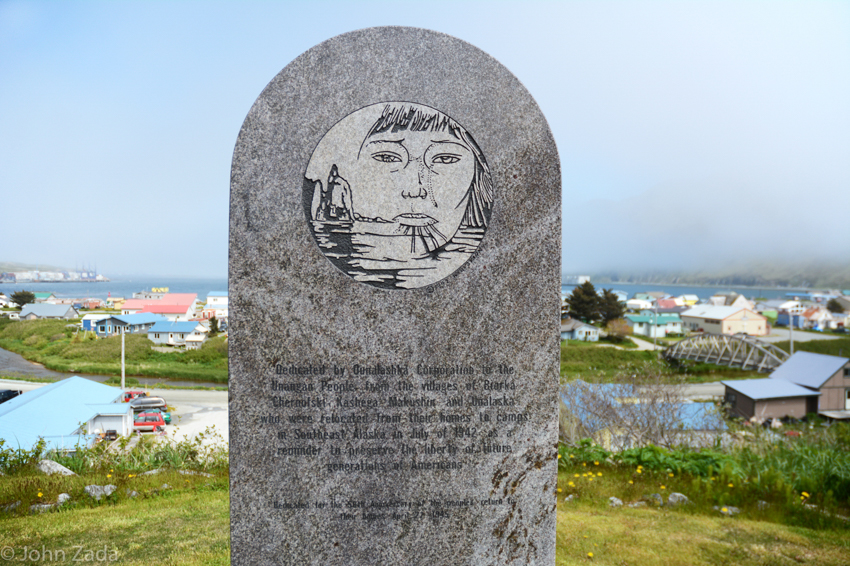 After the Japanese attacks, the U.S. military ordered the mandatory evacuation of the Unangax from the Aleutians. Residents were given less than a day’s notice, allowed one suitcase each and weren’t told where they were going or when they would return. In all, 881 Unangax were expelled from nine villages across the archipelago and were interned at abandoned canneries in the temperate rainforests of south-eastern Alaska for three years. Many had never left their homeland before, let alone seen trees. Around 10% of the camps’ population perished during the internment years due to poor housing and sanitation conditions and limited access to health care. Those who returned to Unalaska in 1945 found their villages either looted or burned down. In the 1980s, the Unangax sued for ill-treatment and deprivation of their rights in conjunction with Japanese-Americans who were also interned during the war. In 1988 a restitution law was passed in the US granting financial compensation and an apology to the Unangax from both Congress and the President. The etched stone slab pictured here in the community of Unalaska is a memorial to that dark period. 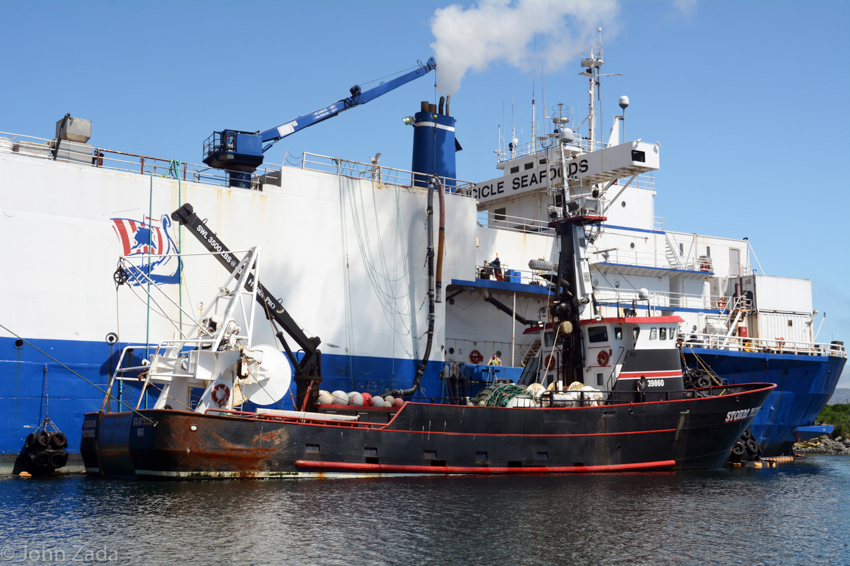 After World War II, Unalaska became a hub of the US’ commercial fishing industry, which still dominates the island today. Dutch Harbor brings in more seafood than any other port in the US (it is the main delivery port featured on Discovery Channel’s hit reality show, Deadliest Catch). Four hundred vessels from 14 countries make port here each year, catching several hundred million pounds of fish – around 10% of the entire US fishing industry. Various ground fish, halibut, salmon, herring and several varieties of crab are among the species caught in nearby waters. 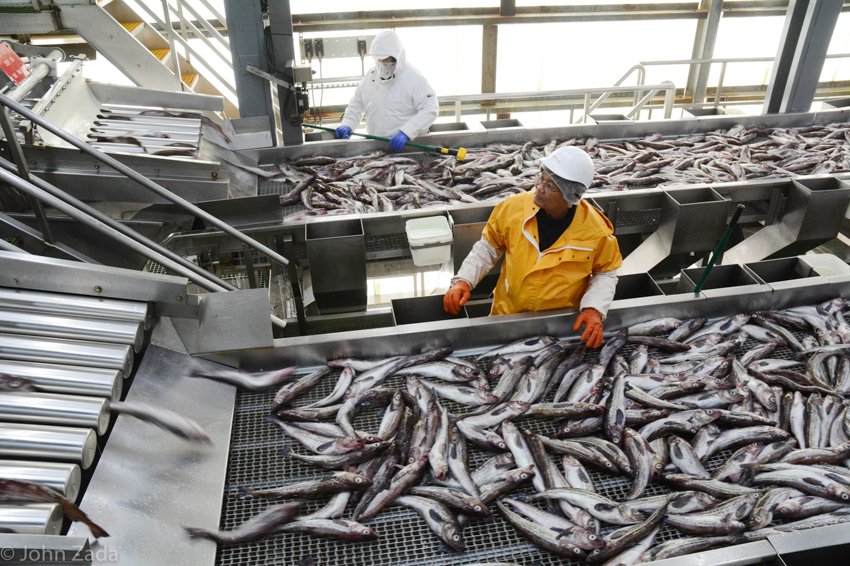 Alaskan Pollock comprises 80% of all seafood processed on the island and is used to produce roe, fish fillets for such products as frozen fish sticks and Fillet-o-Fish sandwiches at McDonald’s and Surimi (imitation crab meat). UniSea, the largest seafood processing plant on the island, has some of the highest environmental standards of any fishery in Alaska, including traceable seafood and lowest by-catch. “We use every part of the Pollock fish here and nothing goes to waste,” said Tom Enlow, the president and CEO of UniSea and a resident of Unalaska. “Fish oil gives us a renewable hydrocarbon to help power and heat our plant and worker accommodations, thereby offsetting the burning of diesel.” 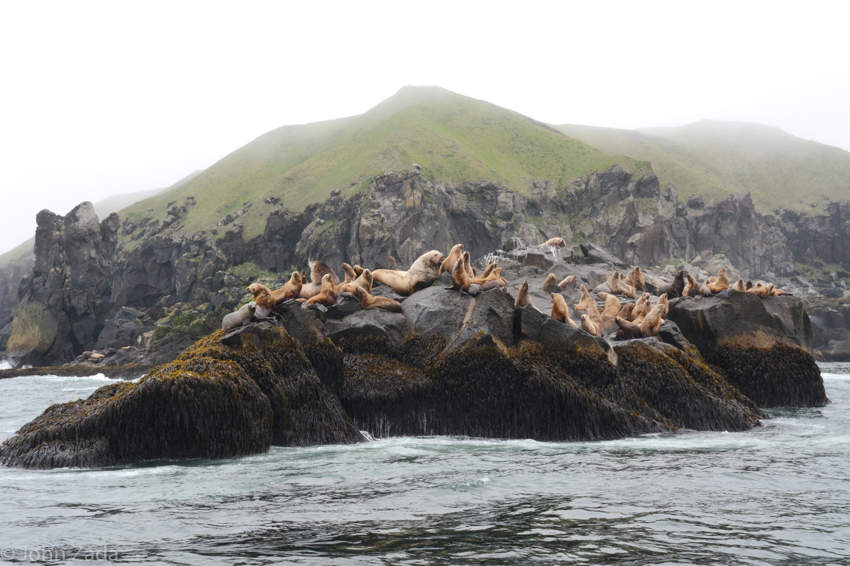 In addition to their abundance of fish, Unalaska’s nutrient-rich waters play host to one of the largest concentrations of marine mammals in the world, including orcas, Dall porpoises, sea otters, harbour seals and whales (humpback, pilot and fin). Stellar’s sea lions gather on isolated rocks known as rookeries to mate and give birth between May and July. The Aleutian coastlines are also home to a nesting seabird population larger than that in the rest of the US combined. Bird enthusiasts travel from all over the world to see the varied waterfowl, especially the ultra-rare whiskered auklet. 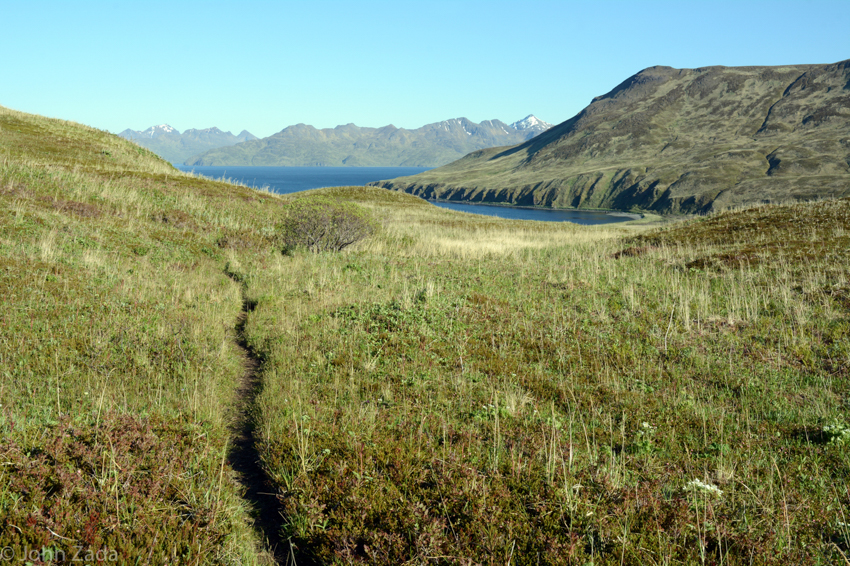 Hiking Unalaska’s trails exposes more of the island’s history. The trek to Ugadaga Bay, shown here, follows a traditional portage route to Beaver Inlet on the Pacific side of the island, which helped connect the village of Biorka, once situated across the water on the other side of the Inlet, to Unalaska Bay. The trail is believed to have been used for thousands of years. The Native landholding Ounalashka Corporation, which works in part to protect the environmental, culture and language in Unalaska, regulates outdoor activities today and issues permits to help prevent exploitation and despoilment of the land. To hike Unalaska’s rolling alpine meadows and dramatic humps of mountains is to experience the palpable soul of the Aleutians. These lyrical landscapes soften the harsh and sometimes unforgiving attributes of a place deeply beholden to the elements.

A version of this photo essay appeared on BBC Travel on July 25, 2018.