Farafra Oasis: The End of the Line 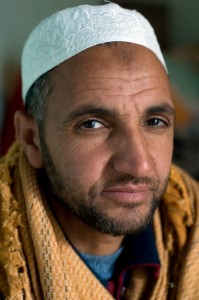 The last thing anyone would expect to find in one of the most isolated outposts of humanity is a famous man. Meeting “Mr. Socks” – or “Dr Socks” as he prefers to be called – at the edge of a palm grove in Egypt’s smallest and most remote desert oasis was a lesson that the affliction of human fame can develop in places shrouded in virtual obscurity.

“Everybody knows me,” says Gaafar Abdullah, th 39-year-old Bedouin who earned his catchy nickname by virtue of his longstanding business of knitting and selling camel wool clothing: socks, scarves, gloves and hats. “My name is on the Internet and in guidebooks. I am a very famous man.”

Abdullah is a kind of local celebrity and claims that he’s also known to many people worldwide who, by some whim or chance have happened upon a tiny swathe of green, deep in an ocean of isolation.

Located in a depression several hundred kilometers southwest of Cairo, and at the centre of Egypt’s unforgiving Western Desert, is Farafra Oasis – one of the smallest and least visited parts of inhabited Egypt. Palm forests, sulfurous hot springs, Bedouin farmers and an enchanting air of calm bordering on inertia characterises this tiny patch of cultivation. Farafra is one of a string of desert oases linked by a road that fans in an arc westward from the Nile, part of what Egyptian officials began referring to in the 1950s as ‘The New Valley’.

Situated closer to Libya than to the Nile, Farafra is considered by many Egyptians (most of whom have never been there) as the proverbial end-of-the-line. Even local desert aficionados express dismay at Farafra’s bewilderingly small size and isolation, to the point where some of them speak of the oasis as a virtual non-entity.

But in spite of its puny size and position, Farafra Oasis has always played an important role in the history of the Western Desert. Its life-giving wells, located further west than all others, have made the oasis a necessary way station for caravans and travellers criss-crossing the waterless wastes of the Sahara. The Greek historian Herodotus wrote that the army of the 6th-century Persian King Cambyses departed from near Farafra on its ill-fated march across the Great Sand Sea to distant Siwa Oasis. The military caravan vanished in a sand storm and was never found. The Persians were later followed by the Romans and Byzantines both of whom manned distant outposts of their empires here. In 19th and 20th centuries, desert explorers – including an elite unit of the British Special Forces during the Second World War – used the oasis as a platform in which to launch expeditions deep into the Sahara.

With its long history and periodic entanglements in the affairs of empires, Farafra has surprisingly little to show in terms of relics or material culture. Its main archaeological vestige is the centuries-old dilapidated mud town of Qasr al Farafra. The village remains partially inhabited and is surrounded by a lacklustre settlement of small concrete tenements of the same name. Dust-blown and exuding an air of abandonment, Farafra’s main town resides in another dimension, located somewhere between the outskirts of modernity and the metaphysical void. But therein resides part of its charm. 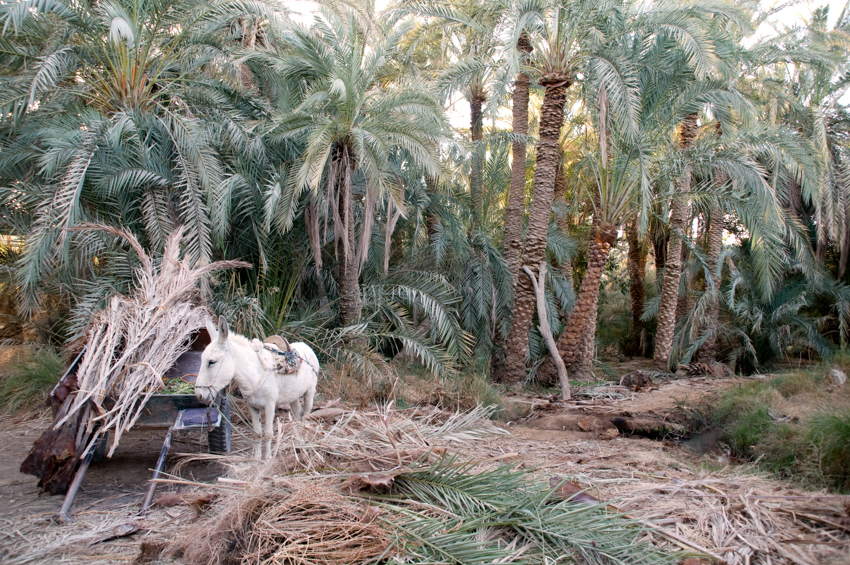 Flanking the old town to its immediate south and west is one of several large tracts of cultivated land bursting with crops and towering date palms – the real heart and soul of the oasis. One can lose oneself for hours exploring these idyllic blooms of green that locals refer to in English as ‘the gardens’. The area teems with plants, insects, animals, and thermal springs, and is caressed by draughts of desert air. There is an almost total dearth of human activity here, save for the odd farmer or hot springs bather.

Farafra’s calm and simplicity are profoundly soothing. Despite the isolation and material deprivations that residents must endure, that tranquility makes life virtually impossible for them anywhere else. “I can’t be away for more than a few days,” says Dr. Socks, a he stops to wash his hands and face at a hot spring. “Even going to the other oases is a very big trip for me. I don’t feel at ease in these places.”

Stepping out of the palm groves and into the surrounding desert, one is reminded of Farafra’s isolation. A short journey in any direction from the oasis will lead to some of the most pristine, dramatic and sometimes unusual desert landscapes on the planet. Farafra sits at the cusp of several unique and converging landscapes, including the White Desert, the Black Desert and the Great Sand Sea – one of the largest sand dune fields on Earth. A short drive along the main road leading north from the oasis brings into view dramatic and unusual formations including giant white chalk inselbergs, and clusters of conical sand and rock formations called yardangs and hummocks.

Because of its sights and location, Farafra remains one of the preferred embarkation points for travellers looking to explore the far recesses of the Egyptian Sahara. The oasis itself, however, tends to be overlooked by visitors, who, with a little extra time and effort, might discover for themselves an hidden hot spring, a tranquil palm grove, or even a famous man.

This story ran in The National newspaper of Abu Dhabi on March 7, 2009.